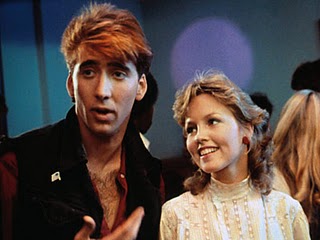 Cage, Foreman, not at all grody

(Sorry, I have to do a prelude with this reprint: the whole joke of the opening paragraphs is that this review was written in mid-1983. Okay, proceed.)

Remember 1982? Those were the days: E.T., the Go-Go’s, Smurfs. And remember those crazy Valley Girls, who rose up from the shopping centers and hair salons in California, with their wacky sayings—”Gag me with a spoon,” and “Fer sure,” and “Tubular”? Valley Girl mania must have lasted a good four, maybe five months.

Back then, it probably sounded like a great idea to cash in on the trend with a movie—just slap the title Valley Girl on it, throw a bit of plot around the edges, and make a quick little killing.

But life was simpler, more clear-cut, back in ’82. For instance, the big crisis in Valley Girl springs from its Romeo and Juliet situation: our Valley Girl heroine, Julie (Deborah Foreman), falls for punk rocker Randy (Nicolas Cage), and runs the risk of being ostracized by her preppy friends.

Now, as the movie finally opens in the Northwest (six months or so after its initial release), the differences between the preppies and the punks have pretty much disappeared. Lifestyles, fashion, and music have melted into a single mushy mixture of preppy-punkdom.

This might suggest that Valley Girl is already dated, or less believable than it might have been. Maybe so. But if those battle lines between fashion factions have become blurred lately, it doesn’t mean Valley Girl can’t be enjoyed on its own merits.

And, believe it or not, it does have merits. Modest merits, to be sure; but there’s a good-natured feeling about the whole low-budget enterprise that makes it endearing.

Not that the film doesn’t engage in the usual shenanigans of this genre; there are plenty of teen-age girls in bikinis, and a few sophomoric sex jokes. That’s to be expected. But Valley Girl is a world away from the likes of Porky’s.

This film presents its two main characters—winningly played by dimpled Foreman and sleepy-eyed Cage—with a fair portion of sensitivity. Their friendship doesn’t just exist to provide a springboard for a string of gags; it actually seems to matter.

The care with which Valley Girl is made is probably courtesy of the director, Martha Coolidge. Coolidge is not particularly gifted with the camera—although she’s clearly made the film under shoestring conditions—but she has a talent with the young actors, and the film moves along nicely.

There’s a scene in which Julie and Randy go on a walking date through the streets of Los Angeles, and Coolidge frames the couple against the garish neon signs of fast-food places and shopping malls. The sequence manages to be as romantic as if they were walking down a Parisian boulevard, and it’s funny, too—but in a friendly way, not a sarcastic way.

To over-praise Valley Girl is to kill it, so I’ll stop. After all, the Big Decision of the movie involves Julie’s choice for the senior prom. But if that kind of thing can still seem crucial to you, think about giving this little movie a look.

Oh, go ahead: over-praise! I love this movie. I guess that “mushy mixture of preppy-punkdom” was called New Wave, a patch of music history I remain un-fond of. (However, good soundtrack here, leaning heavily on the Plimsouls’ glorious “A Million Miles Away” and Modern English’s “I Melt with You,” songs that remind you that great music emerges even in the down times.) The opening paragraphs were intended as a joke on the quickness of fads, because the review was written barely a year after that stuff happened. I was wrong about Coolidge’s gifts with the camera (she’s very aware and precise as a visual filmmaker). I interviewed Coolidge for a Film Comment piece when Rambling Rose came out (FC issue Nov.-Dec. 1991) and she talked about how Valley Girl came out of all the research she’d done on a punk love story that was going to be produced by Francis Coppola; when that project went kerflooey, she put all her feeling for music and the milieu into Valley Girl. I’m so glad I pointed out the neon-lit date scene; that’s a magical moment in movie romance, especially given the incongruous setting—but the incongruous setting makes the moment all the more precious.

This entry was posted on Tuesday, November 30th, 2010 at 4:00 am and is filed under 1983, Actually Good 80s Movies, Directed by Women, Music Movies, Youth Comedies. You can follow any responses to this entry through the RSS 2.0 feed. You can leave a response, or trackback from your own site.