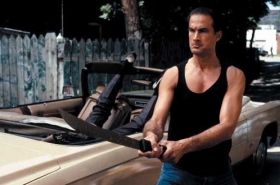 Above the Law is a violent, bloody shoot-’em-up that presents the screen debut of famous martial-arts master Steven Seagal.

I know—I’d never heard of him either. But who’d ever heard of Chuck Norris back in the days before he karate-chopped his way to mega-stardom? So keep an eye out; Seagalmania may soon be upon us.

Actually, Seagal (I don’t think his name is pronounced like the moniker of the Seattle Seahawk cheerleaders) has a couple of things on Norris. Three, in fact: He’s tall, dark, and handsome, which Norris is not. His acting, on the other hand, is at roughly the same level.

In Above the Law, he’s cast as an ex-CIA operative, now a Chicago cop and family man. His CIA past comes back to haunt him when a shipment of plastic explosives that turns up in Chicago is tied to the killing of a priest and an imminent assassination attempt on a U.S. senator.

Our man goes into action, with the help of his partner (Pam Grier) and the support of his wife (Sharon Stone), who seems to be around to provide the bad guys with someone to threaten. The action sequences are regular and persuasive, and Seagal, who moves well for a big guy (and also speaks fluent Japanese), breaks a few of the villains in half.

Most of the bad guys cower and say things such as, “Don’t do me ugly, man,” as Seagal is about to discombobulate them. The head heavy is played by Henry Silva, whose icy eyes and razor-sharp cheekbones have carried many a B-movie into evil territory.

Interestingly, the movie turns more and more into an anti-CIA tract. Seagal, who worked on the screenplay with director Andrew Davis, comes down hard on the unchecked operations of the secret agency. Of course, Seagal can condemn the CIA for being above the law and out of control, but it’s OK for him to use illegal wiretaps and searches when he’s doing his thing.

In today’s customary action-movie fashion, Above the Law tries to be sardonically funny as it notches its body count. Seagal is not above allowing the occasional one-liner to slip out of the corner of his mouth, and at one point he forces a CIA agent to strip down to shorts and jump into Lake Michigan. Trying to make amends, the agent looks up at Seagal and says, “Maybe I’ve judged you too harshly….”

But for the most part Seagal just has to look mean, which he does. When, at a tense moment, somebody asks him, “What are you gonna do?” he answers, “You don’t want to know.” And you don’t.

First published in the Herald, April 1988.

Who knew the surprisingly good Under Siege and the massively weird On Deadly Ground were just around the corner? The cheerleaders joke might be wasted on non-NFL fans, but the Seattle dance squad is indeed called the SeaGals; how they missed doing a tie-in with Steven Seagal is a mystery. Nobody ever heard of Sharon Stone again.

This entry was posted on Wednesday, December 15th, 2010 at 4:00 am and is filed under 1988, Action, Martial Arts, Seagal. You can follow any responses to this entry through the RSS 2.0 feed. You can leave a response, or trackback from your own site.