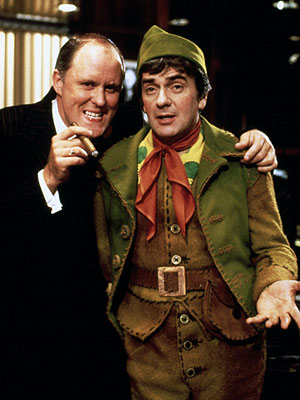 For one thing, the title is Santa Claus, not Santa Claus—The Movie, as the advertisements would have it. That’s a good sign, and this film bio of the jolly fat man in the red suit is a bit better than some of the sour advance publicity had suggested.

Unfortunately, it’s still nothing great. The film, on which a reported $50 million was lavished, comes to us from the Salkinds, the millionaire film producers who created the Superman series.

The structure here is similar to that of Superman: We’re shown how the hero’s legend was born, and then how the hero acquits himself in a battle against an evil foe.

Santa Claus, as we first see him, is a kindly woodcutter who delivers toys to the children of his village. One night, during a howling storm on Christmas Eve, Santa (veteran character actor David Huddleston) and his wife (and their twin reindeer) are lost in the snow—and, in fact, seem to perish in the blizzard.

However, a bunch of little elves come to the rescue the next day. Santa and the Missus are trundled off to a huge magical workshop, where he is instated as the deliverer of the presents. A half-dozen reindeer are added to the team, and they’re fed a meal of juiced-up hay, which allows them to fly at Santa’s command. And, for the final coup de grace, a wizened old geezer (played by Burgess Meredith, so you know he’s the soul of elfin wisdom) pulls his beard and decrees that Santa is now the toy-maker to the world.

Fine. That’s the story of the legend, and the first half-hour of the movie. The rest of the film pits Santa against a mad villain (John Lithgow) whose toy company makes shoddy merchandise.

This plot is more fun than the expository section—not least because Lithgow is chewing up all available scenery. He latches onto one of Santa’s wayward elves (Dudley Moore, looking sheepish throughout) who creates a puce lollipop with pixie dust that allows children to fly. Lithgow gets to cackle and say things such as, “We’ll take the cash and let the elf face the music,” so he’s happy.

There’s also some business about Lithgow’s good-hearted little niece and the tough street waif she befriends, but the less said about that the better.

Santa Claus is handsome and well-mounted, but there’s a void of inspiration that prevents it from attaining the kind of charm that Superman had. Director Jeannot Szwarc (Jaws II, Supergirl) seems to have the soul of a businessman, and there isn’t a moment in the film that touches something magical.

On the other hand, it is, at least, coherent—even when it’s borrowing. David Newman (one of the Superman scriptwriters) has kept more than just the structure of Superman; he even has a scene in which the protagonists giddily fly over nighttime Manhattan, just as Superman and Lois Lane did (Margot Kidder isn’t around to sing a song here, however).

Newman fills the movie with familiar Christmas material (and, by the way, this is a secular Santa—no religious questions about the real meaning of Christmas). Elves dance and sing, happy in their work; Santa ho-ho-hos to his heart’s content; the reindeer eat their magic hay and mug for the camera.

There’s enough of that sort of thing to satisfy younger children, no doubt about it. But if you’re old enough to be taller than Dudley Moore, you’re probably going to be underwhelmed.

Jeez, I closed with a short joke? Against the great Dudley Moore? Moore took a famously large paycheck to do this movie, and his career was never quite the same after. Jeannot Szwarc was a familiar name in sixties and seventies TV before he dabbled in movies for a while (“Night Gallery” was a fruitful pasture for him), and the guy is still plowing ahead in episodic television, so good for him. (“Soul of a businessman” still seems about right.) Trivia: As I was reading the phrase “a bunch of little elves,” a dim memory clicked, and I realized I’d typed that phrase because it was from a novelty song I would hear every year on a Seattle radio station. I just listened to it again on YouTube (the title is, in fact, “We’re a Bunch of Little Elves,” by the Flying Rashid Brothers), and it’s not a classic but it is the kind of thing that will strike you right if you’re driving around a rainy Christmas Eve and it comes on the radio and you get to say “Oh good, there’s that stupid elf song again.”

The song can be found here.

This entry was posted on Friday, December 24th, 2010 at 4:00 am and is filed under 1985, Sci-Fi. You can follow any responses to this entry through the RSS 2.0 feed. You can leave a response, or trackback from your own site.