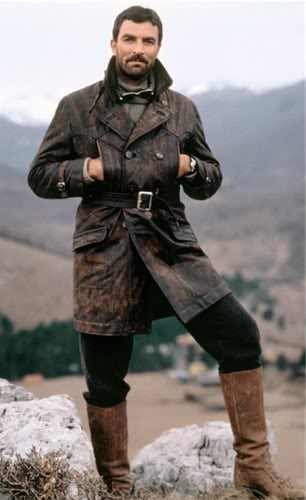 The reigning king of TV hunkdom, Tom Selleck, has gotten his first crack at a starring vehicle. The clunky machine they’ve dusted off for him is called High Road to China, and it’s about a brat heiress (Bess Armstrong) who must find and present her rich-but-flaky father to the civilized world, else the bad guys (led by Robert Morley) declare the old boy legally dead. To this end, she hires a boozing pilot (Selleck) and his mechanic (Jack Weston) to fly her all over hellangone, chased (none too stealthily) by the heavies, and bring Dad back in time to protect her inheritance. From this, we can be sure of two things: upon finding daddykins, the heiress will discover she really wuvs him, not just his money; and, though she and the pilot loathe each other through most of the film, they’re gonna end up in a tight clinch. I’m afraid this makes High Road to China sound more fun than it is. Selleck is all right, but the movie does his character a disservice in his big scene: jawing with some of the boys, knocking back whiskys and brandishing a cigar, Selleck goes serious in the midst of their Great War stories. Seems the Kaiser ran short of adult flyers in the last days of the war, so young German boys were sent up to dogfight the experienced enemy; Selleck describes the sick feeling of taking target practice on these kids. It’s his dark secret, and the reason for his isolation and inebriation—except that it’s not a secret; and here he is blabbing it to everybody. Now, if sidekick Weston had been given these lines, delivered when Selleck was absent, an entirely different kind of resonance would be given to Selleck’s character; his inability to talk about it would give depth to this inner pain. Weston, in the Walter Brennan-Thomas Mitchell role, is wasted, and Bess Armstrong is a Strong-Willed Heroine to make Lauren Bacall and Katharine Hepburn roll over in their graves. If they were dead, that is.

First published in the Informer, April 1983.

The memory bank has been wiped clean of this movie, except as an example of Selleck’s early inability to get off the dime with his TV stardom. I can’t help but think of it with The Aviator, Christopher Reeve’s flying movie set in a similar era, and another DOA attempt to give a vehicle to a hunk. I was surprised when reading this to realize that Robert Morley was still around, and Ralph Richardson too.

This entry was posted on Monday, January 3rd, 2011 at 4:00 am and is filed under 1983, Action. You can follow any responses to this entry through the RSS 2.0 feed. You can leave a response, or trackback from your own site.