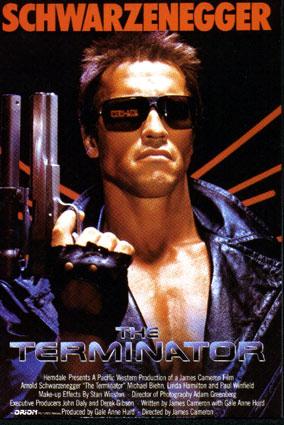 In the opening moments of The Terminator, we see a bombed-out landscape of rubble, decorated with hundreds of human skulls being crushed by the machines of war. A title comes on screen: “Los Angeles –2029 A.D.”

Funny, it looked like Los Angeles, 1984. No matter—the action soon skips back to current times. This, you see, is a time travel story, and what we’ve got here are a couple of warriors from the future (post-nuclear war) wasteland coming back to us with a mission.

One of them (Arnold Schwarzenegger) is a cyborg—which means he’s human on the outside but run by machinery inside. Naturally, he’s indestructible. He’s come back to ’84 to eliminate a woman (Linda Hamilton) who will give birth to a kid who will grow up to be an anti-cyborgian in 2029. This is complicated, but, if Arnold erases the girl, his society goes on its automated way through all eternity.

The other time traveler is a human rebel (Michael Biehn) whose job it is to stop Arnold. Lotsa luck, buddy. Arnold outweighs him by about three to one, and Arnold’s got infrared eyes to let him see in the dark.

So these two get dropped down, buck naked, in L.A., where Arnold starts systematically killing off everyone named Sarah Connor. Some unlucky women get terminated, and the real Sarah gets a clue: She can get out of town or change her name.

The cops (led by Paul Winfield and Lance Henriksen, who try to give a little personality to their roles) protect Sarah at the police station. Winfield says, “Lie down on the couch and get some rest. You’ll be perfectly safe; we’ve got 30 cops in this building.” If that isn’t an invitation for Arnold to lumber in and unleash some massive termination, I don’t know what is.

That, after all, is what this film is all about. There’s not much more than 10 minutes of conversation and/or mushy stuff sandwiched in between the shooting, torching, and all-purpose terminating. If you want to make a termination movie, this is how to do it. The Terminator is fast, nihilistic, sometimes even blackly funny.

It has some interesting special effects, including a cyborg double for Schwarzenegger, who performs surgery on himself after battle (even yanking one of his own eyeballs out—they’re just for show, anyway). Stan Winston, who cooked up the effects, has had a career ranging from The Autobiography of Miss Jane Pittman to The Thing.

The director (James Cameron) and the producer (Gale Anne Hurd) worked their way up through the ranks of exploitation movies, and they’ve learned their lessons well. Maximum bang-bang, minimum kiss-kiss. The Terminator is shredded with nonsense and illogic, but the crowd that will turn this into a box-office hit won’t care about that. The movie gives you your four bucks’ worth of destruction, if not much more.

Well, I sound much more enthusiastic during the meat of the review than I do in the somewhat tepid finale here. The movie’s now a classic, and of course the wellspring of a large franchise. It is always tricky to write a review of a Schwarzenegger film, because you have to type a complicated name many times. Even harder when the character has no name. Thus all the “Arnolds” in this review.

Speaking of which, this kicks off a week of Schwarzenegger pictures hereabouts.