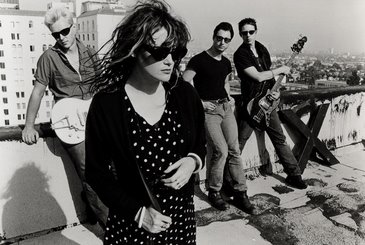 The term “rockumentary” may never be the same after the demolition job of This is Spinal Tap, which parodied the form mercilessly. But somehow, people can still make documentaries about rock ‘n’ roll with a straight face—witness last fall’s frequently painful Bring on the Night, with Sting.

However, we have proof that good rockumentaries can exist, as long as they don’t keep a straight face. Such a film is The Unheard Music, which chronicles the growth of the Los Angeles band X, an innovative group that exploded during the Los Angeles punk scene of the late ’70s.

The film, written and directed by W.T. Morgan, is a shoestring affair five year in the making, so we see snatches of the band at different stages in their growth. The four musicians are an odd crew, and a highly entertaining one: energetic drummer D.J. Bonebrake, blond, bland-faced guitarist Billy Zoom (who has since left the bad), bassist-vocalist John Doe, and the heart of the group, the highly unusual, weirdly touching vocalist, Exene Cervenka.

Exene’s vocals will either strike you as incoherent squalling or a super-charged cry of anguished concern. Or both, maybe.

Interspersed with performance clips and impromptu moments with the band members—Bonebrake doodling the themes from TV shows on his vibes, Exene and Doe harmonizing to Hank Williams songs—are nutty commercials and public-service announcements, largely ’50s-era. Morgan keeps the film skipping along from one thing to another—chronology is only slightly heeded—and there’s never a dull moment.

Others appear in the film—some soft-headed record company officials, sympathetic disc jockeys, and the producer of X on record, Ray Manzarek. Manzarek was a member of the Doors, and there’s a nice moment when he joins X in a hard-driving version of the Doors’ “Soul Kitchen.”

Much of the film is about the struggle by X to find airplay in the notoriously rigid world of radio (The Unheard Music is an all-too-fitting title), and to find a supportive record company. One record exec reports he’s starting to think that, if they were a bit more commercial, X may just have the capability to be another Eagles or Fleetwood Mac, a pronouncement the band would no doubt find heartily amusing. X, thank heaven, has no intention of being the next Eagles, and more power to them for that.

First published in the Herald, March 1986

In 1986 documentaries were not opening for regular theatrical runs on an almost weekly basis as they are today. So catching up with something like The Unheard Music, and actually getting a chance to see and hear a great band like X at length, was pretty special. I don’t remember much about the maligned Bring on the Night, but I’ll look for my review of it, and keep the “music movie” theme going for a few days.