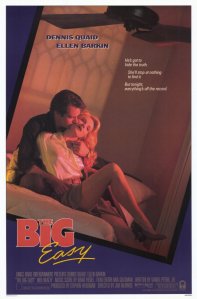 Industry insiders assure us that the Hollywood movie of tomorrow will have far less sexually oriented material—a reaction to the conservative climate and the fear of AIDS, supposedly. Which means we’d better enjoy the steam heat in films such as No Way Out and The Big Easy while we can.

Actually, there’s not even any explicit nudity in The Big Easy (the title’s not what you think—it’s the nickname of New Orleans). But the wonderfully sexy atmosphere conjured up by director Jim McBride and stars Dennis Quaid and Ellen Barkin far outstrips many more graphic films.

Quaid plays a New Orleans detective who has built much of his career on casual kickbacks; indeed corruption is pervasive in the department. New Orleans saints they ain’t. That’s why district attorney Barkin is suddenly hanging around. She’s going to put the bad cops away, even to the point of prosecuting Quaid, a good guy who’s just gotten lazy.

If there is logic to the world, The Big Easy is the film that springs these two fine actors into more recognizable prominence. Quaid has never been so assured before (and he’s very adept at his Cajun accent). Barkin, the sad-eyed wife in Diner and the homewrecking sister in Desert Bloom, is immediate and reactive as always. And they look very good together.

Director McBride’s stock should rise, too. He started out making underground films, and The Big Easy and his underappreciated Breathless are his only mainstream features. His sense of style is often breathless.

Daniel Petrie Jr.’s screenplay was originally set in Chicago, but McBride had the good sense to move it to New Orleans, a much fresher setting, where the corruption seems as liquid as the humidity. As with the Los Angeles McBride created in Breathless, the city is very much a participant in the drama, and has probably never been more vividly realized.

There’s some business about gangland murders that Quaid is solving, but this is almost impossible to follow, except that it eventually comes back to Barkin’s investigation. Ned Beatty plays another corrupted cop, and the late Charles Ludlam contributes a witty performance as a defense attorney (“the man that got the governor acquitted,” someone says admiringly).

McBride doesn’t pay that much attention to the difficult storyline, and neither should the audience. There’s simply too much pleasure to be taken in the seductive atmosphere, the Cajun music, the spice of the two main characters.

First published in the Herald, August 1987

This was a nice movie to champion back then. I always thought it was a great example of the party movie, the kind of film where it didn’t matter much whether it all hung together because the sense of it being a traveling party was so strong and sustained. Quaid and Barkin did go on to bigger things, although the Quaid-McBride Great Balls of Fire turned out to be a rather large letdown.