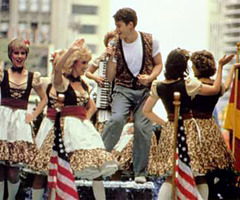 “How could I possibly be expected to handle school on a day like this?”

These words are spoken near the beginning of Ferris Bueller’s Day Off by the title character, and there is simply no arguing with him. High school promises another day of learning about European socialism; but the blue Chicago skies portend adventure and fun. Faced with such a choice, you gotta be realistic.

So Ferris (Matthew Broderick) adopts a sickly mien for the benefit of his parents, who swallow his routine whole and leave for work. For the next 10 hours, Ferris, his buddy Cameron (Alan Ruck), and his girlfriend, Sloane (Mia Sara), play hooky in the Windy City, in a day that turns out to be pivotal for all of them.

As Ferris and his pals take off in the pristine red Ferrari that belongs to Cameron’s fussy father, we also watch the parallel stories of Ferris’s sister (Jennifer Grey), who resents her brother’s charmed life (he gets away with everything) and tries to have his subterfuge exposed; and the school’s dean (Jeffrey Jones, the daffy emperor from Amadeus), who loathes Ferris’s occasional vacations and personally sets out the track the kid down.

The day itself consists of mostly tame diversions: a visit to the museum, a ballgame at Wrigley Field, a look down from the tallest building in the world, and some improvising at a parade. The events themselves don’t count so much as the liberating sensation of freedom. And that feeling works more powerfully on Cameron, a hypochondriac who lacks Ferris’s understanding of the necessity of fun.

As delightful as much of this is, Hughes still hasn’t put together a film that really clicks all the way through. Ferris Bueller’s Day Off ranges pretty broadly off course a few times—the dean’s mishap with a frisky guard dog at Ferris’s house is probably overextended—and Hughes slips into platitudinizing in a rush to get everything in at the end.

Having duly noted these reservations, they can now be put aside. This film is more sheerly enjoyable and invigorating than any other movie out right now. Time and again, Hughes’ film turns into a celebration of living; shorts scenes burst with ingenuity, none more so than in the big parade scene, when Ferris grabs center stage on a passing parade float to lip-synch to Wayne Newton’s “Danke Schoen,” an inspired bit of nuttiness.

This is immediately followed by a lip-synch to the Beatles’ “Twist and Shout,” which Hughes transforms into a love song to Chicago. It may be a tad obvious, but it’s so giddy and unabashed, there’s no avoiding being charmed by it.

The movie contains no violence or nudity or other nasty bits, but it got slapped with a PG-13 rating rather than a PG. Well, sure, a film that encourages sweet liberty, especially among high-school students, has got to be handled very carefully. Notice they waited until after school was out to release it—in the hopes that young minds may forget before autumn, perhaps?

I’ll stand by it. Like the previous Hughes films, FBDO was a marvelous idea for a movie, even if the execution was variable. “Twist and Shout” was probably overkill—if he hadn’t had such hits with Sixteen Candles and Breakfast Club, Hughes probably would have stopped with “Danke Schoen,” but you can see he was feeling his oats a little bit there.