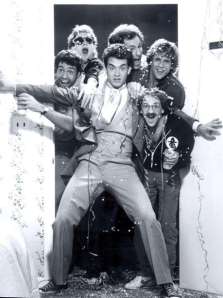 Bachelor Party is a prime example of what is known in Hollywood circles as “high concept.” Now, as everyone is aware, Hollywood is a world unto itself, with its own language, and high concept is a term that has no real meaning.

But among movie folk, high concept is a quality that is lustily sought in film packaging today. If a film has high concept, it means you can convey the entire subject matter, approach, and general mood of a movie with one sentence. The idea is, if it takes much more than that to explain a film, you’ve lost the public’s attention.

A cynical notion, but this is truly what goes through the minds of people down Southern California way.

Take Ghostbusters: Ghosts chased by “Saturday Night Live” alumni. High concept. Gremlins has high concept. Another Country has low concept. Once Upon a Time in America has rock-bottom concept.

But Bachelor Party—ah, it must have been a publicist’s dream. It’s all in the title, folks: the two words promise naughtiness, booze, bare chests of all kinds, music, dancing, the high spirits of the final fling, and a donkey.

All those things are in Bachelor Party, and more. I’m not telling what the donkey does, but everyone else has a wild, noisy time. The audience at the preview screening had a wild time, too, apparently undaunted by the film’s crassness, disorganization, and rampant sexism.

The movie is divided into two parts: a likable guy announces his engagement, and his friends announce the bachelor party. The groom tries to assure the bride that nothing bad will happen at the party, while the girl’s rich parents—and her preppy ex-boyfriend—try to halt the wedding by whatever means possible.

The film’s amusingly sarcastic tone turns raunchy, as the second half of the movie is the bachelor party itself. The boys rent a hotel room, hire some hookers, and proceed to get into most kinds of trouble. A side plot develops as the bridal shower going on at the bride’s house moves downtown to a male strip joint.

Bachelor Party was scripted by Neal Israel and Pat Proft, who also worked on the Police Academy screenplay. As with that film, you envision people setting around a table, composing a screenplay by trying to outgross each other: “Okay, we got the proctologist jokes, we got the transvestite surprise—howzabout we have the donkey overdose on amphetamines and drop dead?” Which is exactly what they do.

For all of its sophomoric excesses, there are funny moments in Bachelor Party, almost all of which are attributable to Tom Hanks, who plays the prospective groom (Hanks was the hero of Splash). Hanks needs a director’s discipline to be really good (and he certainly doesn’t have that here), but he is energetic, a freewheeling comic presence, and he keeps the film alive, even when it’s pursuing crudeness with the same relentless fervor with which the guys have their last fling.

“Relentless” is the word for Bachelor Party. It may be tasteless, but it does have drive; whether or not that drive will also drive you out of the theater will probably depend on your tolerance for anatomy jokes. I stayed, but I was glad to get out.

With Hangover II steaming into view, it seemed time to look back at a movie that made its mark in an era full of movies about young dweebs gettin’ some. It was obvious that Hanks was about to be way, way beyond this kind of thing very soon, and he certainly proved me wrong about needing directing discipline to be really good. I got through the review without mentioning such prime Eighties stalwarts as Adrian Zmed and Tawny Kitaen, for which I can only, belatedly, apologize.