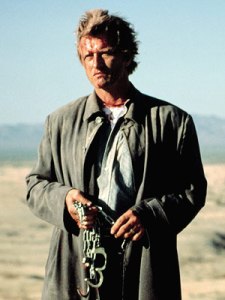 A kid drives alone through the just-before-dawn darkness of Texas. Lightning crackles over the mountains, and rain begins to fall. Despite pumping coffee, the kid can’t keep his eyes open, so when he sees a hitchhiker on the side of the road, he lets the hitcher in.

“My mother told me never to do this,” the kid says. The hitcher proves mom right by coolly informing the driver that he just finished carving up his last chauffeur, and he wonders if the kid knows how far blood spurts when the jugular vein is cut. The hitcher’s grin chills the air: “Scared?”

You bet. This is the adrenaline-surging opening of The Hitcher, a promising first film from director Robert Harmon and screenwriter Eric Red.

Their conceit is that the hitcher (played by the magnetic Dutch actor Rutger Hauer) is malevolently inspired to ruin the life of this kid (C. Thomas Howell). He’s a mad killer—and yet, almost perversely, he doesn’t kill Howell. He wants something else from the hapless traveler.

This something else seems to do with self-destruction, although Red’s screenplay makes the reasons for this mysterious. The Hitcher, looks, in fact, like an existentialist horror film, with the hitcher (whose name is John Ryder—hmmm) as the kid’s own darker self, a maniacal ghostly double who need to be exterminated before the kid can go on with his journey; all of which is played out against the stark nothingness of the American Southwest.

As befits such an elemental premise, the first half-hour is appropriately stripped down. After Howell shakes his unwanted passenger, he spots him again the next morning—sharing the back seat of a passing station wagon with some bright-eyed toddlers. Howell freaks out, tries to flag down the other driver, but in vain. He comes across the wagon later, its riders murdered. Not only has the hitcher committed this foul act, he’s also managed to get Howell blamed for it.

The more Howell gets involved with the local police—and he is for the rest of the movie—the more he gets away from Hauer and the basic duel, and the less compelling the film is. The terror of those opening minutes is so fundamental, it’s hard for anything else in the film to match it.

But every time Hauer comes back, the movie lights up. This is not a revisionist villain, whose evil is explainable because he grew up without social advantages or mother love or proper hygiene. He’s just plain bad.

Harmon’s direction is sometimes reminiscent of Steven Spielberg’s Duel, a classic battle between a man and a demonic truck. Harmon might have taken a lesson in minimalism from that film and kept The Hitcher closer to is elemental struggle. But he still provides a pretty good ride.

And, for you people in the expensive seats who require such things, he also provides some socially redeeming value: No one who sees this movie will ever pick up a hitchhiker again.

Well, now I want to see it again. At this point in his career, it was still possible to anticipate Hauer’s next move with some excitement; he hadn’t yet committed to that strange road that would lead all the way to Hobo with a Shotgun. The movie does indeed fall short of Duel and the “Twilight Zone” episode called The Hitchhiker, but that opening hook is hard to beat.

This entry was posted on Wednesday, June 1st, 2011 at 3:00 am and is filed under 1986, Action, Horror. You can follow any responses to this entry through the RSS 2.0 feed. You can leave a response, or trackback from your own site.