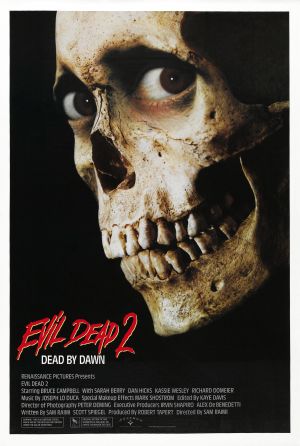 I’m sure a lot of people would not distinguish between good horror movies and bad horror movies, since the genre itself is generally considered debased enough to make such distinctions irrelevant. If you’re one of those people who just don’t like horror movies, best skip to the next article.

The rest of us, however, can take some interest in the career of a young punk director named Sam Raimi, whose bargain-basement The Evil Dead was a cult hit a couple of years ago. The inevitable sequel is here, and Evil Dead II continues the ferocious approach to filmmaking that marked Raimi’s first movie.

The production values are up since that rather amateurish first film, with lots of special effects shots. The basic situation is the same: A group of people get stuck in a cabin way out in the woods, held captive by a fiendish thingie somewhere out there.

The fiendish thingie tries to snatch the folks in the cabin and recruit them into the ranks of the evil dead. That’s the gist of it, and Evil Dead II goes flat-out in an almost unbroken 85 minutes of blood, guts, and screaming, plus a number of entirely intentional jokes, including parodies of Rambo, and other horror movies.

Raimi finds a freaky balance between the non-stop gruesomeness and the gag lines. Or, at least, he doesn’t stop for anything long enough to let you think about it; he’s so full of outrageous camera shots and makeup effects that you don’t have much of a chance to keep up with anything.

Much like Raising Arizona, this is virtuosity of a fundamentally soulless variety, but it’s often undeniably breathtaking. More than a few effects in this film had me shaking my head in either wonder or disgust. Frequently both. And there are some shots and images that are frankly unlike anything I’ve ever seen in a movie, anywhere.

The cast, like the first Evil Dead, is variably talented and built to be disposable; co-producer Bruce Campbell repeats his leading role from the original film. Here, he plays a man who goes mad under the strain, and in a very weird scene watches the electrical appliances in the cabin come to life. And he cuts off his own misbehaving hand with a chainsaw, then smothers the errant member with a pile of books, including—unavoidably—A Farewell to Arms. That’s the kind of movie this is.

Technical point: this was around the time titles of movies got haywire, with the title onscreen different from the title you’d seen in the poster and the TV commercials. So I changed this review to reflect the actual on-screen title: Evil Dead II. But it was originally reviewed as Evil Dead 2: Dead by Dawn, ‘cuz that’s what they were calling it everywhere but in the opening credits. Of course the movie is now a beloved classic, and maybe Raimi’s most delirious picture (but I have a fond spot for the third Spider-man movie, which is much crazier than the everybody’s favorite, Spider-man 2—or is it Spider-man II). Puget Sound-area moviegoers will be interested to note the film opened at the Coliseum, the Aurora Village, and the Thunderbird Drive-In, a collection befitting the grindhouse spirit of the thing (the Coliseum, a grand downtown movie palace built in 1916, was in its final, rundown stages then, the Aurora Village was an already-rundown suburban multiplex, and the Thunderbird a down-at-the-heels ozoner). Oh, to see the Evil Dead II at the Thunderbird Drive-In on opening night—that must have been glorious.