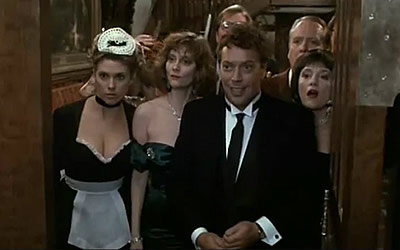 Suspects and waitstaff, in Clue

The strangest thing about Clue is that it took this long to film it. Parker Brothers’ board game, featuring colorful characters and a whodunit set-up, has been a favorite for decades.

You know the rules: Someone killed Mr. Boddy in the big mansion (12 rooms). You must determine the murderer, the weapon, and the room in which Mr. Boddy was killed. Was it Miss Scarlett with the lead pipe in the ballroom? Or Colonel Mustard with the candlestick in the conservatory?

A few new characters have been added for the film. Most important are a butler (Tim Curry) and a French maid (Colleen Camp).

Everybody sits down to a civilized dinner, and slowly, clues begin to emerge—but no no, that’s about all, in fairness, I can tell you. Except that there is a murder—well, of course there’s a murder, or there wouldn’t be any picture. The suspects spends the rest of their time trying to figure out whodunit.

Lest there be any misunderstanding, be it known that Clue is very much a comedy, and very much in the spirit of the board game. And good thing it is a comedy, too, otherwise it would be all too obvious how flimsily the whodunit has been constructed—some of the blind alleys and red herrings are cheats.

But that was almost necessary because of the film’s gimmick: Clue has three different endings, attached to different prints of the film, and an alternate two-minute conclusion is offered in each. So, as the ads put it, whodunit depends on where you see it.

This means that a certain amount of fudging has to go on, so these differing possibilities could be left open.

All these endings were screened for the press, and I can tell you only that one ending is notably superior to the others; all three are explained so hurriedly that I’m not exactly sure who did what to whom, or why. That seems like an inexcusable failing in a murder mystery.

And yet, Clue provides enough sleight-of-hand along the way to distract you from this shakiness. It’s full of exchanges such as, “But who would’ve wanted to kill the cook?”—”Yeah, the dinner wasn’t that bad.”

Most of these goofy lines, which are largely sprung from linguistic misunderstanding, are delivered with sparkle by the funny cast. Everyone has good moments; Madeline Kahn has a few demented speeches (the best of which takes place during one of the endings, so you might not see it) that remind you of how underused she is in movies today.

It’s the first film directed by Jonathan Lynn, who also wrote the screenplay. Lynn has a nice macabre sense of humor, and a penchant for handling slapstick. The only section he misjudges is the early portion of the denouement, which goes on forever as the butler takes the cast on a repeat performance of the evening’s events.

All in all, a painless holiday entertainment—who could resist the chance to hole up for 90 minutes with these familiar characters? My only question is this: When they release the film on videotape, which ending will it have? All three? Or will you have to take your chances, sight unseen? Ah, Clue requires deduction on so many levels….

I hear the Clue remake, courtesy Gore Verbinski, has just been canceled. This means Battleship and Candyland are going to have to stand as next year’s big board game tentpole blockbusters, unless Ridley Scott gets his Monopoly picture in gear. (That’s all real info, by the way.) I had a good time with this movie, in part because Colleen Camp, Lesley Ann Warren, and Madeline Kahn are very appealing in it. The multiple endings were somehow connected to the very brief craze for interactive movies, which thankfully didn’t last long; surely the gimmick hurt Clue‘s box office, because audiences get uneasy if they feel they’re not seeing the whole movie, somehow.