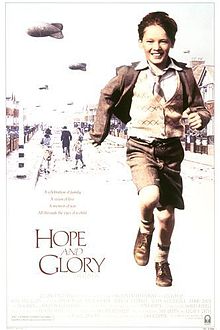 John Boorman has been one of our most interesting filmmakers for more than two decades now, but his movies, from Deliverance to Excalibur to The Emerald Forest, while marked by intelligence and visual inventiveness, have for me always been hampered by an English dourness.

So it is a pleasure to report that in Boorman’s newest film, Hope and Glory, he has found a novel way of relating the experience of living in London during World War II. He plays it as a comedy.

For Boorman, this is a major advance, and Hope and Glory is an immensely pleasurable movie. Boorman has admitted that it is largely autobiographical, as the war years are seen through the eyes of a young boy for whom the war is a long adventure.

For suggesting that wartime might be fun for kids, Boorman has drawn some criticism, especially in England. But this approach represents great honesty, for a child doesn’t necessarily see the moral implications of war or the larger suffering it causes. What young Bill Rohan sees is bombs going off like pretty fireworks at night, fallen shrapnel that can be added to his collection, and the opportunity to gleefully smash things up in houses that have already been destroyed.

Bill is somewhat confused when his father (David Hayman) must leave for military duty. But there’s still fun to be had at home, despite mom (Sarah Miles) and a little sister (Geraldine Muir). There’s even a friendly Canadian soldier (Derrick O’Connor) who’s dating Bill’s older sister (Sammi Davis).

Despite one character’s insistence that “This is war! This is not a laughing matter!”, Boorman finds warmth and humor in nearly every scene, yet the film never becomes frivolous, or loses the underlying gravity of war. Boorman’s got an amazing memory of his childhood, for the individual scenes in this movie gleam with accuracy: Bill notices that all the lawn mowers stopped mowing at the moment the declaration of war was read over the radio; a German can of jam is argued about at the dinner table—what if it’s poisoned?; a barrage balloon deflates and floats across the roofs of Bill’s London suburb.

That suburb, by the way, is beautifully re-created. Boorman has built (and destroyed) a block-long set of vintage houses, all designed to resemble his childhood middle-class neighborhood. It becomes pockmarked enough so that the family eventually moves farther out of the city, to the Thameside home of the grandparents, where the children learn the joys of country life.

Veteran character actor Ian Bannen, as the crusty grandfather, gives the sort of performance that garners Oscar nominations. Bannen plays the very personification of an age when half the world was under the British flag. Most of the time, he’s irascible about the passing of his era and his class, although he does have one moment of grace as he drunkenly recalls the women he’s loved before his marriage.

The film’s most surprising performance comes from Sarah Miles, who spent much, if not all, of her early career as an English sex kitten. In Hope and Glory, Miles is properly matronly for the first time in her career, and she handles the transition effortlessly. It’s a particularly impressive feat, because it’s the mother who must hold the film as well as the family together.

Elsewhere, David Hayman is exemplary as the father, while Derrick O’Connor does beautifully understated work as Miles’ long-ago beau. Young Sebastian Rice Edwards, in the central role, gives another of those unblemished, naturalistic child performances.

The movie ends on a typically ironic, giddy high note: A stray bomb has demolished Bill’s school, and the children celebrate. Boorman won’t moralize; this is a child’s version of the world. If you remember what it was like to pray for the destruction of a school building, you’ll understand the unsweetened nostalgia of Hope and Glory.

First published in the Herald, November 5, 1987

A tip-top film indeed, one that could only have been made by someone who knows the truth about how things really work. Certain objects have such power—a jar of jam, for instance—they will stick in your brain pan for good. Boorman is one of those filmmakers you wonder about: what if he’d had unlimited opportunity to make the movies he wanted to make all along? Such a stop-and-start career, but frequently remarkable.