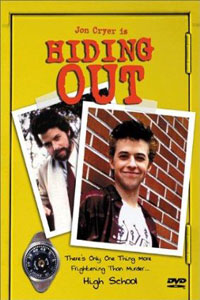 The high-concept boys must’ve had a field day with the nutty premise of Hiding Out. In this one, Jon Cryer plays a young hotshot Wall Street stockbroker whose life goes kablooie when a mobster client decides to eliminate some incriminating evidence. Unfortunately, Cryer and his fellow brokers are the evidence.

So for his own protection, Cryer is taken into seclusion as a government witness. Then the FBI guys guarding him turn out to be less than perfect, and Cryer has to flee for his life, on his own. His escape leads him to a small town where his adolescent cousin provides some safe harbor.

Cryer figures the best way to stay alive is to adopt a new identity, so, and this is where we finally arrive at the concept, he dyes his hair, takes off his glasses, and enrolls in his cousin’s high school. The broker goes back for a refresher in senior economics.

That’s your premise, and it’s admittedly too much of a stretch for the movie to survive. And yet, as Peggy Sue Got Married proved, there’s great comic potential in the possibility of living high school over again from an adult perspective. Once Hiding Out reaches this point, it finds some amusing situations.

Cryer rediscovers the torture of being called to the principal’s office, for example; and he vigorously takes an opposing stand when the uptight history teacher tries to provide the class with a whitewashed version of the Nixon administration.

Most perturbing, however, is the crush that a popular senior girl (Annabelle Gish) develops on Cryer. He takes her out on a date, and even manages to impress her father by dishing out a little free stock-market advice. But he also feels like a dirty old man, since he’s a good 10 years older than his steady girl.

Hiding Out bounces around in an amiable way, helped along by Cryer’s affability and the beguiling honesty of Annabelle Gish (she was the memorable central character of Desert Bloom). The director, Bob Giraldi, also keeps things bopping along – not surprising, perhaps, because Giraldi made his name in the music video field, as the director of such high-powered short shots as Michael Jackson’s “Beat It” and “Say Say Say.” This is his first feature.

Cryer finds himself back in high school, the setting for his biggest success to date, Pretty in Pink, where he had a delightful scene-stealing role as Ducky. Eventually, as Cryer explained during a recent publicity visit to Seattle, he hopes to move on to more mature roles. “Yeah, I want to graduate,” he says. “I got offered a lot of Ducky roles after Pretty in Pink.”

Cryer sees Hiding Out as an analogy for his situation as an actor: Like the character, he keeps getting dragged back to high school against his will. But, he insists with some vehemence, “I don’t care who you go to the prom with anymore, I really don’t.”

Still, there are realities to be faced by the youngish-looking 22-year-old actor. Cryer tried to grow his own beard for the early Wall Street scenes in Hiding Out, but admits that the efforts “wound up making me look like Bork.” A fake beard was installed.

Cryer’s future looks more promising. Still to come is a movie he made before Hiding Out, Dudes, directed by Penelope Spheeris. “That’s a weird little movie.”

First published in the Herald, November 5, 1987

Either something got cut out at the end, or I seriously lost interest. The beard reference would be Robert Bork, the Supreme Court nominee of eccentric facial hair and conservative inclination. This movie was from DEG Films, that DeLaurentiis project that brought Blue Velvet the same year. Different kind of movie, that one.