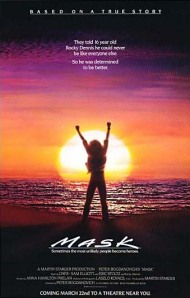 The film begins with sweeping vistas of a California town: The feeling is one of absolute normalcy, of everyday life going on its uninterrupted way. The camera eventually zeroes in on one house, and then one window, where we meet the hero of Mask, Rocky Dennis.

The opening suggests that we could be anywhere, at anytime, in anyone’s home. And Rocky Dennis has all the attributes of the average American kid: He collects baseball cards, listens to rock ‘n’ roll, and dreams of biking across Europe. But Rocky is different, because he suffers from a congenital condition called craniodialphyseal dysplasia, which causes his face to be horribly enlarged and disfigured.

And yet, after the initially shocking presentations of Rocky (played under a heavy load of makeup by Eric Stoltz) the film will go on to stress just how normal Rocky is in almost every way but the physical. We see his adjustments to school, his problems dealing with his hard-living single mom (Cher, who is once again very good), his tentative adventure with first love (in the person of Laura Dern).

The only unusual element is Cher’s social circle, which happens to be a gang of motorcycle riders (led by Sam Elliott). But this film is based on a true story, and that’s the way it was.

It is one of the virtues of Mask that Rocky doesn’t become a goody-goody figure; instead, he remains an average guy in nearly every way. Director Peter Bogdanovich has established a tone of unblinking, unflinching acceptance. He doesn’t emphasize anything, he simply presents Rocky and his story. Soon, we almost forget we’re watching anything strange—and that’s exactly the point Bogdanovich wants us to get.

The film’s only weakness is perhaps its too-easy analogies between Rocky’s “mask” and the various figurative masks worn by others, especially his mother’s self-destructive drug-taking and bed-hopping. But Bodganovich and his actors—and of course, the astounding makeup of Michael Westmore—transcend the occasional message-mongering. They make the film come alive in the immediate moment, and the result is—if admittedly not a perfect film—an extraordinary experience.

Bogdanovich, who was a major force during the 1970s (The Last Picture Show, Paper Moon, Saint Jack), has returned after a four-year hiatus. He continues to find his own voice as a director: Some of his early films were disturbingly artificial in their patness, but Mask has a convincingly lived-in quality. He’s rolled up his sleeves and dug down deep for this one, and the result is a potent emotional experience.

Bogdanovich has retained his talent for staying in the news: Lately he’s raised a stink because Universal Pictures has altered his soundtrack by replacing Bruce Springsteen songs with Bob Seger tunes. That may sound like one of those crazy directors going off on a megalomaniacal tirade, but you can see Bogdanovich’s point: Springsteen carries more iconographical weight than Seger anyway, and there’s a poster of Springsteen in Mask that shares a wall with Rocky’s baseball cards and Europe map. Had the songs remained, it would have been one more layer of emotional meaning in Rocky’s story. Too bad they’re gone.

First published in the Herald, March 1985

It seems as though the movie should have a higher profile, or be mentioned more often in discussions of various careers that overlap here. Certainly at the time it seemed Bogdanovich would get a career reboot out of this—yet his next film took three years to appear, and it was Illegally Yours, fercryingoutloud. I guess there’s a cut with the Springsteen songs in place.

This entry was posted on Wednesday, March 7th, 2012 at 3:00 am and is filed under 1985, Actually Good 80s Movies. You can follow any responses to this entry through the RSS 2.0 feed. You can leave a response, or trackback from your own site.