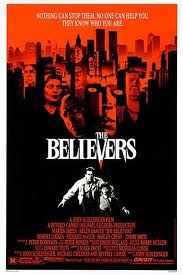 The Believers clearly yearns to be the sort of classy, civilized horror film that Rosemary’s Baby was 20 years ago—it’s got some of the grade-A trappings of a scare show that wants to move uptown.

Uptown Manhattan, in this case, where a recently widowed police psychologist (Martin Sheen) gets mixed up in occult business involving a bunch of New Yorkers who play at human sacrifice. This drags in some African-Caribbean (the film’s never too particular) spell-casting, as well as a batch of supernatural pranks that include a man drinking tea that turns to snakes in his stomach, and a woman’s makeup pad that causes insects to crawl out of her infected face.

The director is John Schlesinger, who used to make such high-toned items as Midnight Cowboy and is now reduced to this. In his previous film, The Falcon and the Snowman, Schlesinger at least managed to work up some mean-spirited social comment. Here, he seems to have thrown in the towel completely, and his job looks like nothing so much as hackwork. Even the reliably superb cinematographer, Robbie Müller, doesn’t find anything much new in the New York locations.

Schlesinger doesn’t even succeed in the matter of simple storytelling. There are some appalling lapses here, and some ridiculous jumps in continuity.

For instance, when Sheen and his ladyfriend (Helen Shaver) become convinced that a voodoo ritual is needed to protect Sheen’s son, they clamber down into a basement with a voodoologist and stage a ceremony. A chicken is slaughtered, blood is dripped on a small figure that resembles Mr. Potatohead, and a few cheap chills are worked up. Then the scene is never referred to again, we have no idea whether it was effective in plot terms (it doesn’t seem to be), and the voodoo man disappears, even though he’s a potentially interesting character.

Among the actors, Helen Shaver is rather nice, Robert Loggia does his gruff thing as a bewildered cop, and Jimmy Smits (Victor Sifuentes on “L.A. Law”) does effective work as the guy with snakes in his intestines.

The revelation that the cultists are a mild-mannered crowd of ordinary-looking folk is a good touch. However, it’s borrowed from previous horror exercises, such as Rosemary’s Baby and Val Lewton’s eerie 1943 gem, The Seventh Victim.

If you look hard enough, you might find a level of political allegory. These cultists are wealthy and politically oriented, and their invitation to Sheen to join them—”A life without uncertainty, without doubt”—has echoes of the Republican “Morning in America” campaign of 1984 (particularly as directed at an actor well-known as a liberal activist).

Fantasy films can sometimes carry social criticism, as in the anti-McCarthyism message in the 1956 Invasion of the Body Snatchers. Perhaps this aspect attracted Schlesinger to the project; if it did, he wasted his time. The Believers never finds a level it can work on, and never inspires belief.

First published in the Herald, June 1987

I thought it was a mess. On the other hand, it sounds like something that might be sort of interesting—just sharing a lineage with The Seventh Victim counts for something.