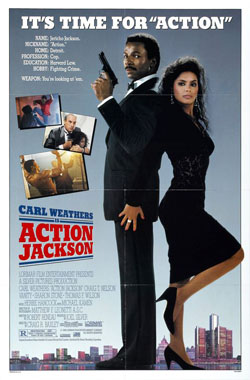 Sgt. Jericho “Action” Jackson has a police officer’s badge, a 1966 Chevrolet Impala convertible, and a chest the size of Mount Rushmore (and just as neatly carved).

He uses all of these things in his job, which is running down criminals and basically scaring the bejeebers out of anybody who gets in his way.

He also has a degree from Harvard Law School. (Ahem.) Well, he doesn’t use that as much as his chest, but then he seems to prefer the hands-on approach: the legal niceties can wait.

He’s also the hero of Action Jackson, a new movie that clearly would like to establish this character as a sequel-worthy guy who could stretch well into the Roman numerals. Strange thing is, he might just do it. Surprise: Action Jackson is an unexpectedly fast and funny movie.

Action is played by Carl Weathers, the fellow who kept coinciding with the business end of Sylvester Stallone’s gloves in the Rocky movies. Weathers is, to put it delicately, quite a load, and his comedic talent has been heretofore quiet. But Robert Reneau’s script contains just enough clever bits to punch up the character, and Weathers has a sufficiently light touch with the one-liner.

Action, a Detroit cop, has a problem: a really despicable car manufacturer (played by the Poltergeist dad, Craig T. Nelson, with plenty of sarcastic snarl). It’s not that he makes bad cars; no, this guy is killing the auto-union officials who are getting in his way.

The plot exists, of course, as an excuse for a few car chases and some spectacular explosions. But to give the film its due, there’s some efficient exposition and a few good secondary characters who are sketched in colorful strokes, like the gravel-voiced ex-pug who manages a rundown hotel, or the hairdresser named Dee who speaks in heavily alliterative phrases prompted by her own first name: “Always delighted to help a detective, dear.”

Director Craig R. Baxley provides the obligatory action stuff, but he also gives Action Jackson a hefty measure of good B-movie bounce. Any director who cuts away from an immolating bad guy to a close-up of meat burning on the grill at a swanky barbecue is clearly enjoying himself.

First published in the Herald, February 1988

Baxley was an experienced stuntman, and is still going strong as a TV director. Vanity, I am sorry to say, did not become the star that Sharon Stone became, but go figure. The Action Jackson franchise did not ignite with this film, so the character wanders forgotten movie byways with Remo Williams and Jake Speed.

This entry was posted on Monday, April 30th, 2012 at 3:00 am and is filed under 1988, Action. You can follow any responses to this entry through the RSS 2.0 feed. You can leave a response, or trackback from your own site.