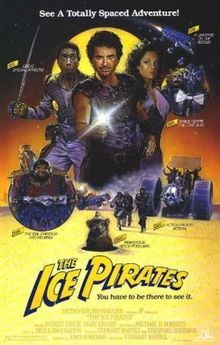 Somewhere within the 90 minutes of silliness that comprises The Ice Pirates is a halfway-decent science-fiction plot. But the movie plays so broadly you won’t find much time being spent developing anything like a storyline. It would get in the way of the goofy gags.

If you did search for the plot, it would sound like this: In the world of the future, water is almost nonexistent, and more precious than oil. A bunch of hooligan pirates trade in the stuff, but they are sidetracked from their standard dastardly deeds when they steal a princess (Mary Crosby) during one of their pickups.

Our heroes (Robert Urich and Michael D. Roberts) get caught, and are scheduled to be subject to a new painless operation whereby they will be turned into eunuchs, and thus slaves. At the end of the assembly line process, they look like Liberace groupies—white pompadours, tight silver lamé jumpsuits, high, squeaky voices.

Luckily, the princess has intervened, and halted the machine at crucial moments. They’re just pretending to be eunuchs (not an easy trick in a tight silver lamé jumpsuit). It seems the princess is searching for her missing father (has there ever been a princess without a missing father?), and can use the help of the ice pirates to journey to the much-fabled, but never discovered, seventh planet, where they say water covers most of the surface of the orb.

If you can predict from this that 1) the princess will be reunited with her father, 2) the fabled planet will turn out to be our own Earth, and most importantly, 3) that the princess and the pirate leader will start panting after each other pretty heavily, well, you can go to the head of the nebula. All will turn out well.

So what’s wrong with the movie? Most everything, really. The special effects are crude, the characters are cardboard, and the forward motion is haphazard. Of course, it’s supposed to be cartoonish, but good cartoons have a basis, if not always in reality, then in some kind of logic.

The worst thing is, The Ice Pirates wants to be funny, but it winds up falling flat on its tongue-in-cheek. The thing is being sold, via a series of teaser ads, as a kind of Airplane! for the Star Wars audience, but its humor is of a coarser kind. Airplane! got laughs by playing everything with a straight face; in The Ice Pirates, characters all but wink at the camera.

The tone is low camp, which encourages some of the actors—especially Ron Perlman, who was one of the apes in Quest for Fire—to go off on the occasional improvisation. There’s also a swishy planet lord who is decapitated but nevertheless continues to supply a stream of one-liners. (A number of things go unexplained in this film.) And then there is this thing that jumps out of an egg, scuttles across the floor a lot, and attaches itself to people. It’s called a space herpes, and we will not discuss it here.

I don’t remember this movie. Yes somehow I feel confident in standing by this review. I just want to point out that the cast also includes pre-Oscar Anjelica Huston, John Matuszak, John Carradine, and Bruce Vilanch.

This entry was posted on Friday, June 8th, 2012 at 3:00 am and is filed under 1984, Sci-Fi. You can follow any responses to this entry through the RSS 2.0 feed. You can leave a response, or trackback from your own site.