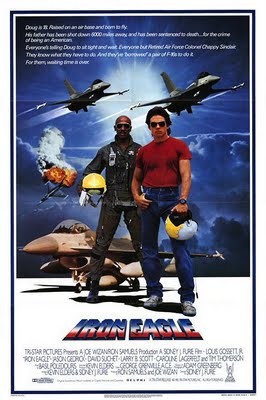 It would be tempting to rip into Iron Eagle for its crude manipulation, phony-baloney patriotism, and distasteful xenophobia. But the film itself saves you the trouble; it’s so bad on the level of plain narrative, it cancels itself out.

The situation is this (as anyone who has seen the innumerable TV ads in the past few weeks already knows): An American pilot is shot down in a Middle Eastern country. The U.S. government, its hands tied by protocol and red tape, can do nothing to save him. The flier’s son steals an F-16 and flies to rescue Dad with the help of a veteran pilot.

That’s it. Now, you’d think that such a streamlined plot would be easy to pull off—and as an action film, it might be good, cathartic, mindless fun.

Nope. Director Sidney J. Furie (who co-authored the script with Kevin Elders) pulls a thorough botch-up. Unbelievably, although the father’s capture occurs in the first minute, it takes Furie more than a hour of screen time to get his big rescue mission off the ground.

In the meantime, he presents the long, boring preparation for the mission. The son (Jason Gedrick) must prove himself time and again—first to the bullies who make fun of him for wanting to go to the Air Force Academy (there’s a big showdown at the local A&W), then to the ace pilot (Louis Gossett, Jr.) who’s going to help him with the mission.

There are many pearls of wisdom along the way. When Gedrick thinks his father may suffer through protracted custody like the hostages in Iran, a friend disagrees: “No, this is different—Mr. Peanut was in charge back then.”

As it turns out, however, the current president is just as unable to get Gedrick’s father out as Mr. Peanut was. Someone tells Gedrick sympathetically, “They got too many people to make decisions—takes too long.”

Maybe this guy should go live in the unnamed Middle Eastern country in which a bloodthirsty dictator (David Suchet) makes all the decisions, without consulting anybody. This dictator is, to borrow a phrase, flaky, and he does zany totalitarian antics, such as sentencing Gedrick’s father (Tim Thomerson) to hang in three days.

So Gedrick and Gossett go charging in, and “Gimme Some Lovin'” plays on the soundtrack as they blow dozens of extras away with a Hades bomb, which incinerates everything around.

It’s a mechanical movie that seeks to do for the Middle East what Rambo did for Vietnam. At least Rambo had some sense of forward motion; Iron Eagle is dead in the water until its final third.

Gossett doesn’t come off all that bad, because he’s a pro, although his character is forced to perform a switcheroo; first he’s dead, then he miraculously returns. This emphasizes the indestructibility of our guys, and makes certain the happy ending will be achieved without any true, bothersome sacrifice. It also answers the question: Just how shameless can this movie be?

First published in the Herald, January 1986

It took me a moment to remember why I used the construction, “to borrow a term, flaky,” but it had to be a Reaganism, and it was, in Ronald Reagan’s immortal characterization of Ghadafi with that term. (Reagan’s geopolitical genius resulted in Ghadafi falling from power 25 years later – score another one for the Gipper.) One might not have predicted a long career for Gedrick based on this performance, but in fact he’s done pretty well for himself. And Sidney J. Furie? He just keeps going.

This entry was posted on Tuesday, June 19th, 2012 at 3:00 am and is filed under 1986, Action, Do We Get to Win This Time?. You can follow any responses to this entry through the RSS 2.0 feed. You can leave a response, or trackback from your own site.