The Man with Two Brains 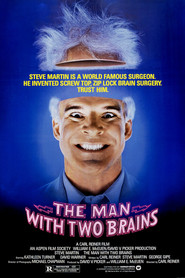 Steve Martin is, of course, one of the great men of our time. But the poor guy has not found his place in the cinema, not yet. Other comics are working well in movies not tailored for them as star vehicles: Robin Williams made a respectable Garp and is now acting for Paul Mazursky, and Eddie Murphy has fallen in with zippy young talents like Walter Hill and John Landis.

Martin has shown some adventurousness: any actor taking the role he took in that curiosity called Pennies from Heaven cannot be called cowardly. Stupid, maybe, but not cowardly. The Jerk was spottily funny, and only because of Martin’s ability to sustain his goon persona; Dead Men Don’t Wear Plaid, while affectionate and mostly likable, became almost oppressive toward the end—you worried so about how they were going to get in and out of all those film clips and still tie up the loose ends, it got nerve-wracking.

The Man with Two Brains is a return to a more straightforward narrative form—that’s assuming your idea of a straightforward narrative goes something like this: conniving woman (Kathleen Turner, from Body Heat) throws herself in front of a car driven by a rich brain surgeon (Steve) as a means of snaring him. He saves her life by using his innovative “Screw-Top” technique of brain repair; but when he sews her skull back into place, he sows the seeds of his unhappiness.

He starts to fall for her even before she’s conscious, which, as it turns out, is when she’s at her sweetest. The doctor soon learns that physical beauty is only as deep as the first epidermal layer, and that true meaningfulness springs form a meeting of minds. Soon after, he goes to Vienna and meets a very nice mind, and for a while he is truly the man with two brains. Lubitsch it’s not, but Steve’s latest romp, despite trying to tie up too many loose ends in its second half, is pretty darned funny.

First published in The Informer, May 1983

This doesn’t quite convey how much of a Steve Martin fan I was back then; his TV appearances and record albums set such a high standard that his early movie stuff seemed disappointing (although many people seem to love The Jerk, especially if they caught it at a young age).

This entry was posted on Thursday, October 4th, 2012 at 3:00 am and is filed under 1983, Sci-Fi, Spawn of SNL. You can follow any responses to this entry through the RSS 2.0 feed. You can leave a response, or trackback from your own site.