She’s Having a Baby 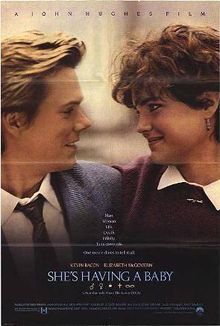 No, She’s Having a Baby isn’t a cash-in on the sudden popularity of such boffo baby movies as Three Men and a Baby and Baby Boom. Actually, this movie was made about a year ago and originally advertised for release last summer

However, writer-director John Hughes got caught up in the making of his subsequent film, Planes, Trains, and Automobiles, which needed to be completed in time for a Thanksgiving release date. So She’s Having a Baby was put off until now, though the postponement prompted rumors of a bomb in the making.

The rumors were unwarranted; She’s Having a Baby is much in the Hughesian vein, which means it’s an amusing, observant, slickly enjoyable movie. This one is, by all accounts, a largely autobiographical film, a reflection of Hughes’ own life as a young married ad man who yearns to be a real writer.

Over the next few years, Briggs puts aside the Great American Novel and takes a job at a Chicago advertising agency in order to support his household (located in a suburbia that seems to be throwing an eternal backyard barbecue). Hughes sketches this life with some authority, having lived much the same existence in the years before he entered filmmaking.

Briggs is tantalized by his friend’s tales of the glamorous life in New York City; and he’s intrigued by a gorgeous, available woman (Isabel Lorca) who keeps bumping into him. Hughes manages to get some admirable freshness into this familiar material, even punctuating the movie with surreal touches—for example when the galloping conformity of suburbia breaks out into a synchronized dance on the front lawns, in which wives pirouette with lemonade and hubbies step-kick with their power mowers.

The baby-making takes up the last third of the movie, up to and including the teary conclusion. The couple’s determined attempts to produce culminate in a session in which the exhausted Briggs goes to duty to the strains of Sam Cooke’s “Chain Gang” (one of Hughes’ typically blunt musical cues).

Though this film is enjoyable in many ways, there is the nagging sense that Hughes too often falls prey to the facility of the advertising images, much like his protagonist. There are too many emotional shortcuts, as though Hughes is unwilling to scratch the surface he has fashioned.

It’s an attractive surface, nevertheless, and incidentally provides Bacon and McGovern with their best film work in a few years.

First published in the Herald, February 1988

I seem to have enjoyed it. Bacon, McGovern, Hughes…it all seems like a different world now, doesn’t it?

This entry was posted on Wednesday, October 17th, 2012 at 3:00 am and is filed under 1988, John Hughes, Youth Comedies. You can follow any responses to this entry through the RSS 2.0 feed. You can leave a response, or trackback from your own site.