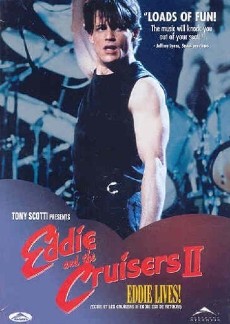 The release of Eddie and the Cruisers was one of the oddest in Hollywood history.

The film flopped upon its original release in 1983, then turned up a year or so later on cable television. Suddenly it was one of the most popular movies on pay-TV, and sales of the soundtrack album went through the roof.

But even such belated success called for a sequel, and Eddie and the Cruisers II: Eddie Lives is finally here. The mystery of the first film was whether Eddie Wilson, a rock ‘n’ roller with one hit album to his credit, really did die in a car crash in 1964. His body was never found, and there was a suggestion that he faked his own death.

Eddie Lives answers this question in no uncertain terms. Yup, he’s alive all right, and living as a construction worker in Montreal (and once again played by inexpressive Michael Paré). Nostalgic Eddiemania is sweeping North America, and a set of previously unreleased tapes is being marketed as the new Eddie and the Cruisers album. Sleazy record execs are encouraging the rumor that Eddie is still alive.

This peeves the real Eddie. He begins to play again, with a bar band, and polishes up some new songs. Meanwhile, he hooks up with an artist (Marina Orsini), who may serve some function in the story although she appears to be there mainly to hang on Eddie’s arm. Eventually, Eddie heads back for the spotlight and his unmasking.

What a crummy movie this is. It plays a series of disconnected scenes, marked by clichéd dialogue (“It’s the music that counts! Not the hype!”) and lifeless performances. Eddie himself is an entirely unappealing character, pompous and sour.

That review seems to cut off in mid-thought and apparently was shortened for space, so my no-doubt devastating finish will have to remain a mystery, much like the original Eddie himself. The first film probably does deserve a place in history as the first example of the home-video revival of a flop picture, which meant that we all had to suffer through the faux-Springsteen music for a couple of years or so.