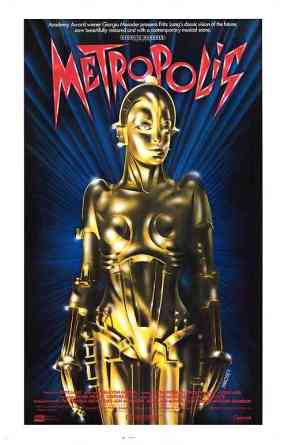 Metropolis first became a gleam in Fritz Lang’s eye when the great German director visited New York City in the mid-1920s and was dazzled by the skyscrapers of Manhattan.

Lang spent the next two years—and a whole sackful of his studio’s money—creating a futuristic movie about workers struggling against inhuman overdeveloped “progress” in the year 2028.

Audiences were even more dazzled by Lang’s majestic vision. When it came time to export the three-hour film, however, somebody decided that overseas viewers would benefit from a shorter version. These original exporters thought it best to cut out a character named Hel, for instance, because they feared American audiences would misunderstand the name. Hel just happened to be the mother of one of the main characters, but never mind about that.

So English-speaking audiences have never seen the full-length film—and they never will. Too many pieces are lost for good.

But the film has been restored to as full a length as possible by extremely surprising hands—those of disco maestro Giorgio Moroder, he of Flashdance and American Gigolo. It seems Moroder got the idea to give Metropolis a vibed-up soundtrack, but he got sidetracked. He started hunting down bits of the movie that had fallen out along the way.

This reissue of Metropolis, then, is Moroder’s unique contribution to film history. He’s gotten some of the movie off the shelves of collectors. He’s also given it a rock music score, complete with Pat Benatar, Adam Ant, and Bonnie Tyler.

Now, that rock score, in theory, sounds pretty cringe-worthy. And in fact, some of it stinketh. The songs, which feature lyrics that stupidly comment on the action, are somewhat obtrusive.

But the instrumental music is often quite good, and certainly does not seem outrageously out of place in Lang’s bizarre dream world.

Ultimately, the movie rests and falls on its visuals. It was shot as a silent film, and can thus presumably stand on its own. Does it?

The answer from this reporter: an unqualified, slack-jawed, weak-kneed Yes! Wow! What a movie. The theme, as stated, is basic: “Between the head and the hands, the heart must mediate.” The head is the ruler of Metropolis, Joh Frederson (Alfred Abel), who runs the city from his office high among the skyscrapers.

The hands are the workers, who exist in slavery in horrific quarters deep below the city. The heart comes into play when Frederson’s son (Gustav Frolich) has his consciousness raised by the presence of a good woman (Brigitte Helm), despite the efforts of a mad scientist (Rudolf Klein-Rogge) to stop them from leading the workers to the light.

Lang visualizes this simple theme with astounding ingenuity that goes beyond the spectacular production values. But oh those production values: the huge underground city, the transformation of a woman into a robot, and—would you believe 11,000 bald-headed extras constructing the Tower of Babel?

Frolich is something of a wash-out in the lead role, and Abel’s part seems shortened by the original editing. But two of the performers have been immortalized by their roles. Klein-Rogge is the ultimate mad scientist, and Helm is disturbingly weird as both the Lillian Gish-like good girl and as the lusty, utterly crazy robot.

The film has, for years, been called a prediction of the rise of Nazism. It’s interesting to note that Lang, who was sometimes accused of being a dictator on the set, left Germany in the early 1930s after Nazi Minister of Propaganda Joseph Goebbels invited Lang to make official party films for the National Socialists. Thea von Harbou, who wrote the humanistic message of Metropolis—and was also Lang’s wife—stayed on and worked for the Third Reich.

Historical considerations aside, Metropolis is a spellbinding movie experience. Even with Moroder’s win-a-few, lose-a-few soundtrack, it puts the current competition to shame.

An early showing of this version was a benefit for the Seattle Film Society, as I recall. Of course, film history has gone far beyond the running time of Moroder’s cut of the movie, what with reels found in Argentina and all. Whatever your opinion of Moroder, the movie did look really cool on a giant screen again. There were a few zany moments, including one etched in my brain that involves the creation of the robot and Bonnie Tyler bellowing the words, “Here she comes!”

This entry was posted on Tuesday, January 1st, 2013 at 3:00 am and is filed under 1984, Music Movies, Sci-Fi. You can follow any responses to this entry through the RSS 2.0 feed. You can leave a response, or trackback from your own site.