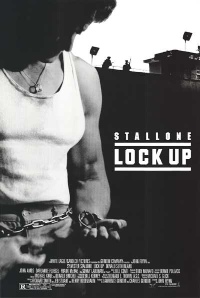 Sylvester Stallone’s new movie, Lock Up, begins with shots of our hero exchanging loving hugs with his girlfriend and sifting through sentimental old photographs, all accompanied by sensitive piano music.

Piano music? And they call this a Stallone movie? Well, yes, as it turns out. Soon enough, Lock Up gets back to basics. It turns out Sly is a convict on a weekend furlough; he’s quickly back in prison, where he awaits his upcoming release. (His crime, of course, is completely justifiable, so there’s no problem being on his side.)

Unfortunately, he gets transferred from his comfy county club jailhouse to the state’s “garage dump,” a place run by a psychotic warden (Donald Sutherland) who has it in for Stallone. When Sly arrives at the prison, the warden takes him down to look at the nice electric chair and, bathed in red light, announces, “This is hell. And I’m going to give you the guided tour.”

The tour consists of the next 90 minutes, wherein Stallone is beaten up, slammed into the mud, knifed, and driven into the sewers. Such masochism is, of course, a Stallone hallmark, and as always he revels in getting shellacked. There’s also a lot of absurd buddy-bonding, as well as the customary Stallone catch phrases (“Nuthin’s dead ’til it’s buried, man,” is the favorite here).

Director John Flynn (Best Seller) does a competent job in terms of moving things along, but the film is watered down, colorless. The only suspense comes from waiting to see which of Stallone’s little buddies is going to get killed and thus set him off into a climactic rage.

You find yourself waiting for Donald Sutherland to glide into view, because it’s such a relief to see someone who’s interested in doing a little acting. Sutherland doesn’t have very much to work with—most of his role consists of walking over to a window to watch Stallone be humiliated in the courtyard below—but he does bring an elegant sense of depravity to his scenes.

First published in the Herald, August 1989

Not often mentioned when Stallone’s 1980s career is cited, and it was no blockbuster. But as you can see, it taps into some of the man’s most cherished obsessions, and nothing is dead until it’s buried, man.

This entry was posted on Thursday, January 24th, 2013 at 3:00 am and is filed under 1989, Action, Stallone. You can follow any responses to this entry through the RSS 2.0 feed. You can leave a response, or trackback from your own site.