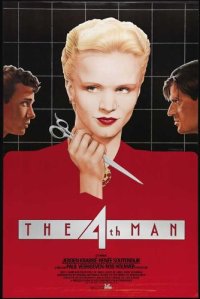 The Fourth Man is a nutty Dutch exercise in paranoia and fantasy, served up by a director who – for want of able competition as much as his own talent – has distinguished himself as by far the most interesting Dutch filmmaker working today.

His name is Paul Verhoeven, and he’s been represented on local screens in recent years with Spetters and the very popular Soldier of Orange, which was something of a breakthrough film for Verhoeven and the Dutch cinema in general.

Verhoeven’s talent seems coherent and fluid without being particularly visionary, but when I heard that his new film, The Fourth Man, was a far-out excursion into excess and bad taste, my hopes were raised that he might push himself into more imaginatively vivid filmmaking.

The Fourth Man succeeds in this, though not quite as far as one might have hoped. It’s got bad taste and outrageousness galore, but by the time it ends, you feel it’s just starting to explore the possibilities it raises.

But it’s certainly fun while it lasts. The main character – and the person through whose sensibility the film is filtered – is a Catholic homosexual writer (Jeroen Krabbe) who is subject to strange daydreams involving Catholicism and bloodshed. He’s been engaged by a literary society to give a lecture about his books, and he travels to the seminar and spends the night with the treasurer of the society (Renee Soutendijk). He has these weird dreams that Soutendijk takes a pair of scissors and, well, emasculates him during the night. Naturally, he regards her a bit oddly the next day. Then he starts to suspect her of murdering her previous husbands (she’s had three), and he fears, with increasing anxiety, that he may be the next victim – the fourth man.

Verhoeven presents this mad tale as a feverishly funny bad dream. He fills the movie with little clues and details that seem to be part of a monstrous, interlocking pattern – some lurid destiny that this man sees coming but cannot avoid (Krabbe gives a properly haunted, end-of-his-rope performance).

Verhoeven teases us to such an extent that we never do know whether this enigmatic woman is really the devouring spider Krabbe thinks she is. For all that we see, outside of his masochistic fantasies, she’s a normal woman who’s happened to have unnaturally bad luck with her husbands – one fell out of an airplane, one was devoured by a lion, one was run over by a boat.

We see the preludes to all these “accidents” via Soutendijk’s home movies. When you see husband No. 2, grinning stupidly in home-movie amateurishness, get out of his car and amble over to a lion in a safari park – all the while waving around a juicy slab of meat – you begin to understand just how gleefully perverse this film is.

Obviously, Verhoeven needed some kind of introduction in ’85. I liked his Hollywood career-to-come better than than his Dutch films, but The Fourth Man is a movie that clearly needs re-visiting.