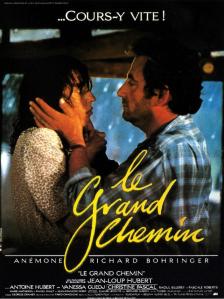 The new French film, The Grand Highway, naturally finds itself lumped together with other recent autobiographical films about childhood, such as My Life as a Dog, Hope and Glory, and Au revoir, les enfants.

It’s a memory movie, too. But, as nice as The Grand Highway is, it proves the point that not all autobiographical remembrances (in this case, those of writer-director Jean­-Loup Hubert) are created equal.

It’s about a crucial summer in the life of a 9-year-old boy, Louis (Antoine Hubert, the director’s son), who is dropped off by his pregnant mother to stay with friends in the country while she has her baby. Louis, a city boy, has his eyes opened considerably during his month in the country.

There are many bucolic diversions. One of the most prominent is the tomboy who makes Louis her playmate. Despite the fact that she enjoys throwing slugs at the nuns and dares to shove a fistful of eels down the front of Louis’ pants, he can’t help but like this lively little companion. Other fascinations include the cemetery, the garden, the church with its invitingly tall steeple. But Louis is most interested in, and most anxious about, the couple he is staying with. The husband (Richard Bohringer, the zen-master in Diva) is rough and teasing, sometimes drunk and mean. The wife (Anémone) is frail and stiff, and obviously disappointed by the central tragedy of their lives together, a tragedy that is revealed to Louis and helps him understand human behavior.

In this movie, it isn’t just the kid who has his life changed by the summery experience, it’s also the adults; the well-acted bickering marrieds are drawn together by their time with the little boy. All of which is somewhat pat, which exemplifies the limitations of The Grand Highway. Movies about childhood can often be informed with the detail of memory, and this movie has some nice examples of that, but Hubert’s film can’t find a novel way to make some very familiar growing-up points.

My Life as a Dog and Hope and Glory may have covered similar turf, but they invented fresh ways of seeing it (the former through a retreat into unreality, the latter through wartime comedy). The Grand Highway takes the standard approach, and is a standard movie.

First published in the Herald, 1988

Original title: Le Grand Chemin. It was released by Miramax, just before the moment Miramax turned into what it was going to be for the next 20 years. Probably a perfectly nice movie, but as I said, it paled in comparison to some of its contemporaries. I publish it here as a reminder that Europe had its humdrum 80s movies too, and we saw more of them during this era than we see today (in stateside theatrical release, anyway). Bohringer and Anémone won César awards for this film.

This entry was posted on Thursday, January 9th, 2020 at 7:00 am and is filed under 1987. You can follow any responses to this entry through the RSS 2.0 feed. You can leave a response, or trackback from your own site.