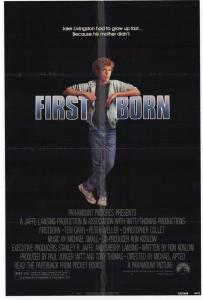 Firstborn is a skillfully manipulative example of American suburban Gothic, with enough jolts and hollers to get the blood pumping at a satisfyingly high rate.

It has a novel subject for a thriller: a pair of brothers (one in high school, the other grade school) watch with increasing anxiety as their divorced mother falls under the spell of a suspicious-seeming new boyfriend.

You’ve seen this kind of creep before: the buzz-word patter, the smarmy heartiness, the incessant talk of just getting that one big score. All the while living off other people; in this case, the mother, who invites him to move in with the family.

To the older boy, it become clear that the freeloader is not just obnoxious – he’s actually dangerous. He appears to be a dope dealer who has the mother so hopped-up on cocaine she doesn’t realize what she’s doing. The showdown, clearly, is going to be the kid vs. the dark invading monster.

Since so many elements of the film work on such a primal level – the invasion of the home, even the hinted-at Oedipal threat – it really gets to you in a basic way. The preview audience with whom I saw the film was whooping loudly when the first-born son started standing up to the boyfriend. This emotional response is carefully prepared for – almost too much so, as the film takes a while to get untracked.

It’s manipulation, but with an interesting idea. After all, just what are children to make of their single parents’ new friends and lovers? This film exaggerates what must be a common anxiety for children in this situation.

Britisher Michael Apted directs from the point of view of Jake, the older boy (Christopher Collet), and he does a shrewd job of revealing sinister bits of information about the menacing boyfriend – who is played with scary intensity by Peter Weller, lately the hero of Buckaroo Banzai. Weller’s dark, ghoulish face and iridescent blue eyes make for a spooky enemy.

You can see how the mother could fall for him; but you can also see why Jake instinctively distrusts him. When the little boy (Corey Haim) asks Jake how he knows mom’s new friend is no good, Jake can only say, “I just know.” No reasonable explanation – but sometimes you just know.

Teri Garr, who plays the mother, has some trouble getting a handle on her character. Garr, usually cast in comic roles (as in Tootsie and Mr. Mom and many others), is by no means out of her league, but the role itself is poorly written. She has to be very passive, or else she would have booted the bum out of her house much earlier. The explanation – that cocaine has clouded her reason – doesn’t quite work in dramatic terms.

But enough of Firstborn does work in dramatic terms to make it tick. There are weaknesses in Garr’s characterization and some serious deck-stacking, but when it comes to the business of making your blood race, Firstborn is quite satisfactory.

Mostly forgotten, yes? Robert Downey, Jr., and Sara Jessica Parker are in this movie, and it was Corey Haim’s first film. It seems like some sort of cult status should attend to this thing, given that all the elements are in place.