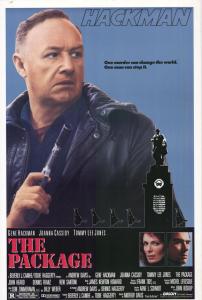 The Package, however, doesn’t pretend to be anything but fiction. It’s about an Army sergeant (Gene Hackman) who’s assigned to escort a troublesome soldier (Tommy Lee Jones) from Europe to the United States. When the “package,” as Jones is called, slips out of Hackman’s grasp, Hackman begins to sense an elaborate plot focusing on an upcoming U.S.-Soviet summit in Chicago.

The film, directed by Andrew (Above the Law) Davis, trots along at a competent pace. It has a few interesting threads that were either never developed or dropped on the cutting-room floor, such as Hackman’s bantering, loving relationship with his ex-wife (Joanna Cassidy). Perhaps the most intriguing of these threads is the pairing of Hackman and his package; Tommy Lee Jones has an offbeat, mysterious playfulness that jibes well with Hackman’s simple, blunt Army lifer. But they spend too little time together.

There’s also an Oliver North figure, played by John Heard, and a standard issue Chicago cop (Dennis Franz) who helps Hackman circum­vent official channels. But the different elements of The Package don’t come together, and its attempt at conjuring a sense of governmental paranoia seems tame compared to reality.

Hackman contributes a nice character study. He’s one of the few actors who can play simple characters without playing down to them, and that’s exactly what he’s up to here.

Hackman was in Seattle recently (he’s shooting a movie in Vancouver, British Columbia), and he spoke about his acting method. “Usually things that look effortless have a lot of hard work behind them,” he said, referring to his non-showy style. “I don’t take any of it very casually.”

Hackman described his early stirrings toward acting; walking out of a movie in his hometown of Danville, Ohio, he was stunned to catch his reflection in a mirror and not see Errol Flynn.

“I realized then that I was so involved with the character in the theater that I had really transferred myself into that. At that moment, I think I really decided that I would like to do this. I think I could do this.” After a stint in the Marines and some knocking around New York, he did it. Hackman has worked a lot in both leading and supporting roles, in the last couple of years. “I would do almost anything as an actor, if it was offered to me. I like to work. There are people out there who have some kind of parameters about how much work you should do. I don’t know who those people are. Let them talk to my ex-wife’s lawyers.”

First published in The Herald, August 1989

Hackman was working a lot in those days (oh, those lawyers), and I assume the Vancouver movie he was shooting was the Narrow Margin remake. This movie was a stiff, but Andrew Davis’s next two films were Under Siege and The Fugitive (both with Tommy Lee Jones, of course). Jones had Lonesome Dove come out the same year as The Package, and he was about to break through into the meat of his career. I had forgotten the Felix Bloch affair, but it was a spy case that got into the headlines at the time.

This entry was posted on Friday, May 22nd, 2020 at 5:00 am and is filed under 1989, Action. You can follow any responses to this entry through the RSS 2.0 feed. You can leave a response, or trackback from your own site.