The Osterman Weekend is a competent, professional double-cross movie. That sentence can stand as a lukewarm recommendation of the film, but it’s really sigh of disappointment.

The disappointment stems from the fact that The Osterman Weekend was directed by Sam Peckinpah, who, after studio battles and illness, hadn’t made a movie in five years. Peckinpah, despite the conventional wisdom of cocktail-party cognoscenti, is one of the best stylists of his generation of filmmakers, and the possibilities for this adaptation of the Robert Ludlum novel seemed promising.

Rutger Hauer plays a Mike Wallace-type TV interviewer who, faced with evidence that his three closest friends (Craig T. Nelson, Dennis Hopper, and Chris Sarandon) may be Soviet agents, helps an American government agency spy on the group during an annual weekend get-together at Hauer’s place.

Every room in his house has been wired for videotaping by the strange government man (John Hurt) running the show, and Hauer feels the pressure of being caught between lying to his friends and lying to the camera. It isn’t long before the old college buddies start to guess that Hauer suspects something—especially with the kind of tricks that Hurt and his high-tech cohorts have cooked up for the weekend.

To tell any more would be unfair. The various twists and turns of the story are complicated, but Peckinpah and company have laid them out so that the viewer won’t get completely lost in the plot forest.

For all its professionalism, the film lacks a sharpness—that bite that Peckinpah gets into his movies, that cutting edge that does not necessarily have anything to do with the director’s much-publicized onscreen violence. There are taut sequences in The Osterman Weekend, but Peckinpah, at his greatest, uses action to reveal character, and that quality is sorely missed here.

When Hauer’s wife and son are kidnapped at the airport, it’s the occasion for a nicely-mounted chase, but that’s all. It turns out that this snatch is just another game staged for Hauer’s benefit; but we won’t fully understand that until much later.

Hauer, the Dutch star of Soldier of Orange and Blade Runner, seems a bit dislocated as the main character, but the supporting cast is odd and flavorful, and Meg Foster’s performance as Hauer’s wife helps turn her character into the most admirable person in the film.

Rumor has it that The Osterman Weekend was taken out of Peckinpah’s hands and recut for distribution; if that’s true, it might help explain the movie’s peculiar thinness. In particular, it would have been fascinating to have devoted more screen time to the John Hurt character—an agency man with a mission, a killer with a tortured soul.

As it stands, The Osterman Weekend is not the comeback vehicle for Sam Peckinpah’s cinematic gifts. And somehow, one of the most disappointing things about it is that it’s not a mad, extravagant failure. It’s just standard.

First published in the Herald, October 1983

I haven’t watched this since it came out and I’m nurturing the idea that it might be much, much better than it seemed to be then. Which I guess is one reason never to watch it again. Peckinpah died without completing another feature, so that adds to the letdown around this misbegotten title.

When legendary freakazoid Dennis Hopper dried out and went straight a couple of years ago, his acting career understandably got back into long-delayed gear; for a while, it seemed as though every other Hollywood movie had Hopper in a juicy supporting role (Hoosiers, River’s Edge, Blue Velvet).

It was inevitable that Hopper would try to revive his directing career, which had blossomed with the epoch-making Easy Rider and then crashed and burned with one of the most notorious flops of all time, The Last Movie. Apparently it was Sean Penn’s idea to recruit Hopper to direct Colors, a cop movie about gangs in East Los Angeles.

This combination of card-carrying bad dudes would seem to promise a combustible collaboration, especially with Robert Duvall, himself a Hollywood renegade, added to the mix. As it turns out, given its already explosive subject matter, Colors has gobs of gutter-level power. It’s also often inarticulate, and it operates only under the loosest of structures.

Penn and Duvall play cops, partners in the war zone. Penn is a cocky young strutter who attacks petty criminals with overt sadism; his girlfriend (Maria Conchita Alonso) tells him, “You have a mean heart.” Duvall is a year away from retirement, and he takes a slower approach, content to throw the little fishes back in the water in hopes of making a really big catch.

These two cops could almost be seen as different parts of Dennis Hopper’s personality. Penn is the hot-blooded kid who thinks he needs “the edge” to do his job well; Duvall warns him that he went through the same kind of insanity himself once, “and what I remember most from that time is regrets.” Hopper directs this relationship with the authenticity of one who has been there and back.

The movie is so gritty and relentless, you may not notice how choppy the actual storytelling is. Hopper is stronger at finding the inside of individual moments, such as the terror of a bust that goes bad when the wrong man is shot, or a dying cop’s face bleached out by the harsh white light of a police helicopter. Overall, Colors may not quite hang together, but the devotion of the actors, the punchy music of Herbie Hancock, the late-afternoon cinematography of Haskell Wexler, all combine to create some heat. Dennis Hopper, it seems, has not made his last movie.

And it was even a box-office success. Hopper did direct again, and seemed to settle comfortably into his aging-celebrity role. This movie’s a mess, but on some level it got the job done, and became a key part of the man’s rehab. 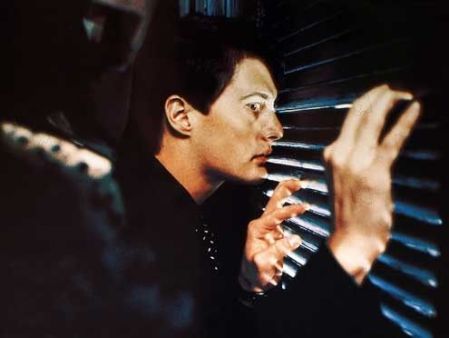 The camera tilts down from a clear-blue sky into some brilliant red flowers. A man is watering the lawn on this small-town afternoon. It is a quiet scene, yet the rhythms of the editing lend a sense of foreboding. The water is spitting out of the hose with alarming power and, as the pressure builds, the man is stricken and falls to the ground.

Whereupon the camera seems to descend into the lawn; leaves of grass loom in huge close-up, and then the camera burrows into the ground itself, revealing a nest of battling beetles. Fade to black.

Something strange is going on in Blue Velvet, and two minutes of film have not yet passed. This startling opening sequence sets the peculiar tone for the rest of the film, which turns out to be possibly the weirdest major film of the past decade.

It’s from writer-director David Lynch, whose previous films were Eraserhead, The Elephant Man, and Dune. Lynch has one of the most vivid imaginations at work in films today, and he sets it free in this bizarre mystery.

Moments after the opening, the stricken man’s son (Kyle MacLachlan, the Yakima kid who starred in Dune) is walking across a field. He’s been called home from school, he can’t help his incapacitated father, and he has nothing to do. While looking for pebbles to toss at something in the field, he sees something else in the grass: a decomposing, severed human ear.

He should let the police handle it, but he’s clearly inspired by the thought of pursuing a mystery. He enlists the aid of a doubtful girl (Laura Dern) who helps lead him to the pivotal figure in the mystery, an extremely sultry chanteuse (Isabella Rossellini), who wears tawdry makeup and warbles off-key renditions of songs whose titles contain the word “Blue.”

It would be bad form to reveal much of the plot, but the trail eventually leads to a sexual psychopath, played by Dennis Hopper. (Hopper, of course, is famous for his nutso roles, but this time his performance is genuinely frightening.)

Even though the plot takes some strange turns, the uniqueness of Blue Velvet comes from its disorienting tone. Interspersed among the hypnotic suspense scenes are sequences of (apparently intentionally) ludicrous dialogue and oddly stylized behavior.

For instance, when Dern tells MacLachlan that her vision of hope is linked with the arrival of robins, Lynch stages the conversation in front of a glowingly lit church, with inspirational music. The scene skirts self-parody. (I don’t think Lynch means us to take this straight. If he does, it’s an even stranger film than I thought.)

The clashing of tones seems to come from Lynch’s attempt to discover a new kind of film, wherein the narrative reflects back on the nature of film itself. At the same time, he conjures up images—such as the burrowing of the beetles in the opening—that consistently draw us deeper into dark, exotic, disturbing territory. The only close comparison I can think of for this sort of thing is in the work of the perverse Spanish master, Luis Buñuel.

Blue Velvet will probably provoke derisive laughter in some viewers, and excitement in others. It will, however, provoke something. For those adventurous enough, it will supply a jolt not quite like any you’ve felt before.

First published in the Herald, September 1986

You see Blue Velvet for the first time, and then you go write about it, and you do the best you can. It certainly felt like a movie people were still going to be talking about 25 years later, which was part of the excitement of watching it for the first time—that realization of how significant it was. I watched it 3-4 years ago while preparing for a lecture, and it held up as an American classic, just the right blend of mystery and mystery. It stacks up at my other website as the best film of 1986, where I say a couple more things about it.