If you’ve never seen Close Encounters of the Third Kind or Cocoon, or any other of the contact-with-­friendly-aliens movies of the last decade, then The Abyss may seem like a visionary film, a fabulous mix of action, science fiction, and wonder.

It may seem that way even if you have seen those other movies. But The Abyss, an expert and often evocative piece of action filmmaking, suffers from too much familiarity with these themes of alien awe.

That cavil noted, I hasten to applaud The Abyss as the top action movie of the year thus far. It’s the third movie since January to feature a plot about deep-sea workers trapped with major problems at the bottom of the ocean. But while the memory of Deepstar Six and Leviathan recedes into Z- movie cheesiness, The Abyss comes roaring at you with all the breathless ingenuity that writer-director James Cameron can muster.

That’s quite a bit.

Cameron is the fellow who created Aliens and The Terminator, and he’s an energetic, intelligent talent. The Abyss is his most ambitious effort, in more ways than one.

Most of the movie takes place underwater, at an oil-drilling station on the sea floor. When an American nuclear sub crashes nearby, the military asks the rig to help investigate. The boss (Ed Harris) isn’t thrilled, particularly when his estranged wife (Mary Elizabeth Mastrantonio), who designed the sea station, comes down to supervise. He’s also suspicious of the grim Navy divers (led by Michael Biehn) who seem to have their own agenda.

The journey into the wrecked submarine, an unnerving graveyard of floating refuse and snow-white corpses, is just the beginning of the fun. The film’s full of crackling suspense in an old-fashioned movie way; at almost 2 1/2  hours, the forward motion never flags.

But Cameron is up to more than just adventure. The film is about two things: the exploration of non-terrestrial life (“something not us”), and the exploration of a foundering relationship. The Abyss is like a cross between Close Encounters and Scenes From a Marriage. The marriage of Harris and Mastrantonio is shown in broad but deeply felt strokes (and is well played by those two good actors).

Cameron and his own wife, Abyss producer Gale Ann Hurd, were breaking up during the shooting of this film. That must have made for an interesting production. Their marriage was not the only thing that became strained during the grueling, already notorious filming process. Conditions were so horrible that Ed Harris vowed never to talk about the movie at all. The complicated underwater scenes were shot inside a huge abandoned nuclear reactor in South Carolina, and the logistics were a practical nightmare.

Very little of this hardship comes across on screen; the film’s a technical marvel. Technical but human – Cameron knows just how to play off the big special effects with the personal story. It makes you wonder whether the supernatural elements that creep into the film were necessary at all. Despite the nature of his films, Cameron’s touch is for people, not aliens.

First published in the Herald, August 1989

I wasn’t comparing The Abyss to Cocoon, but I do remember thinking that (in terms of subject matter) The Abyss had just missed being ahead of the curve. So that’s what that comment is about. I realize there might be some debate about my last line, since Cameron is not exactly lauded for his treatment of characters, but on the other hand, Titanic wasn’t entirely a smash because of special effects – at the very least, Cameron has a touch for archetypes. 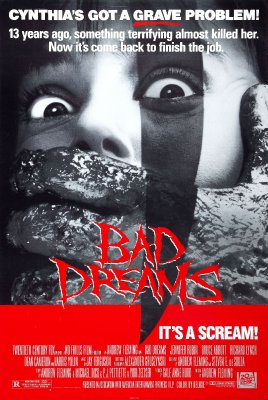 Bad Dreams is an example of what is becoming a frequent form for the modern horror movie. It’s half straight, half put-on, all hip.

Movies such as The Terminator, The Evil Dead, and The Hidden have staked out similar territory, with some success.

In these films, the order of the day is outrageousness, and Bad Dreams has an abundance of that. The film’s prologue describes a Manson-like cult leader dousing his flock (a bunch of people who look like Squeaky Fromme) in gasoline and burning them all up in an isolate country house. One survives, a girl (Jennifer Rubin) who spends the next 13 years in a coma.

When she returns to the conscious world, she enters a group therapy session at a hospital, a collection of nervous patients described by their doctor (Bruce Abbott, a veteran of Re-Animator duty) as “The borderline personality group.” Rubin is convinced the cult leader is still pursuing her, a conviction that gains credence in the way the other patients keep dying off in mysterious ways.

This section of the movie indulges in mucho sick humor, as a trysting couple falls into the turbine ventilation system and the air ducts flow with human blood; and a young patient works off his excess energy by mutilating himself to the tune of Sid Vicious’s “My Way.” Among other things.

Well, maybe that doesn’t sound all that funny. But a lot of Bad Dreams is irreverently hilarious, thanks to the swift touch of director/co-writer Andrew Fleming and producer Gale Ann Hurd (she produced Gremlins). They keep the punchlines (and the graphic bloodletting) coming, and it may not be until after the movie is over that you realize how little has actually happened.

The way Bad Dreams finally comes up short is in failing to exploit the whole cult-family subject. There are a lot of possibilities, horrific and darkly comic, in the milieu. Fleming and Hurd obviously chose not to pursue those aspects, which is their right, and as it is Bad Dreams is high-energy wackiness. It’s also disposable and forgettable, and not even very scary.

First published in the Herald, April 1988

Fleming later made Dick, which is a movie I happen to like a whole lot, so whatever it took to get him there is fine by me.