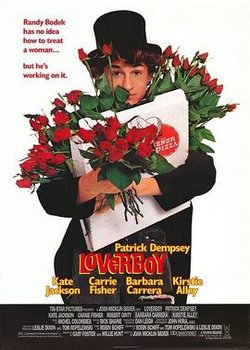 Good farce should glide. You should be able to enjoy the way all the little pieces come together, but you shouldn’t be aware of how they got there. No visible strain. In Loverboy, there’s too much strain, not enough glide.

The story is a kind of young person’s Shampoo. A pizza delivery boy (Patrick Dempsey), home for the summer and frustrated by his sputtering college career, falls under the attention of a wealthy Beverly Hills shopowner (Barbara Carrera). Her attentions include sexual favors, much to the surprise of the skinny lad.

He bungles his first opportunity. “I had a letter to Penthouse staring me in the face, and I let it go,” he tells his dough-slinging buddies. But Carrera persists. Not only that, she recommends his home-delivery style to all of her rich, bored friends whose husbands are cheating on them. Soon Dempsey is carting extra anchovies all over Beverly Hills.

Eventually, his anchovies will come home to roost, as the husbands see through this thin crust of infidelity. All of this is set against Dempsey’s parents’ marital misunderstandings, which include their belief that their son is gay.

The idea of Loverboy is laid out in a somewhat mechanical blueprint, but the movie is brought to comic life on occasion. Part of this has to do with the director, Joan Micklin Silver, whose usual fare is less harried and more gentle (she made the wonderful Chilly Scenes of Winter and last year’s Crossing Delancey).

I have the feeling Silver isn’t too comfortable with the noisier aspects of the Loverboy script. For instance, the wild dorm party that opens the movie is one of the lamest scenes Silver has ever directed. However, she does bring a nice touch to the more lyrical bits: One of the best moments has Dempsey exiting from his first extracurricular encounter and practically dancing across a hotel courtyard, finally tumbling happily into the pool.

There’s a certain level of romance involved in Dempsey’s transactions (for which he accepts money, an awkward point that is never quite smoothed over). He provides roses and back rubs, too. And with a particularly smitten doctor (Kirstie Alley, from “Cheers”) he painstakingly studies the moves of Fred Astaire.

Probably the funniest sequence comes near the end, when Dempsey’s onscreen mother (Kate Jackson) gets fed up with her husband and places an order with the anonymous pizza man. This leads to some Oedipal confusion, but turns out a near-miss.

The picture has some bounce, but it doesn’t consistently work. It’s just a bit too calculated and committee-like to be memorable. Just the same, file it away as a future video pick.

First published in the Herald, April 1989

A few days ago Patrick Dempsey led a group attempting to buy Tully’s coffee, the baby Starbucks chain. Just another twist in the curious career of this actor, who was going through his early leading man phase at this point. Good to be reminded of Barbara Carrera, who loomed large for adolescent boys in the 1970s.