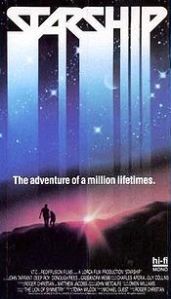 The two cheesy exploitation movies that hit the area last weekend are a real study in contrasts. Deadtime Stories is low-budget and silly, and just marginally watchable. Starship, while boasting a superior budget, is as dull as dried clay.

Deadtime Stories takes the time-honored omnibus route, presenting three scary stories. The first, about a pair of medieval witches and their unwilling servant boy, seems left over from some other movie—it doesn’t quite fit with the rest of the film.

The other two stories are modern updates of fairy tales. “Little Red Riding Hood” is here a nubile teen in a scarlet jogging outfit who runs afoul of a werewolf. The third story is a variation on “Goldilocks,” wherein the three bears are humans, escaped lunatics who find Goldi living in their abandoned house.

Goldi herself is a statuesque vixen blessed with a telekinetic power a la Carrie, which allows her to terminate her long line of suitors. She gets along very well with the bear family, and they even live happily ever after.

Under the clumsy hand of director Jeffrey Delman, this is all done tongue-in-cheek, as is the framing story of an insomniac boy having the tales told him by a babysitting uncle. It’s very clear that most of the budget went for special effects, with little left over for such niceties as professional actors.

Still, Deadtime Stories is comprehensible. Not so Starship, a completely incoherent space thing, directed and co-written by Roger Christian (a name to be shunned in the future). The ads promise, “The adventure of a million lifetimes”; actually, it only seems that long.

I honestly can’t tell you what the film was about, except it had something to do with some people trying to get off a planet that was being taken over by robots. Not a whit of humor, or even intelligible action.

IMDb says that Jeffrey Delman is related to Bernard Herrmann; also, Deadtime‘s cast included Melissa Leo in one of her first movie roles. It opened at the Coliseum in Seattle. Roger Christian did design stuff for Star Wars and Alien, which would explain his move to sci-fi directing; he eventually did Battlefield Earth, which is a lot more fun than Starship. The movie apparently opened in Australia in ’84, but knocked around and was re-cut before playing the U.S. sometime later.