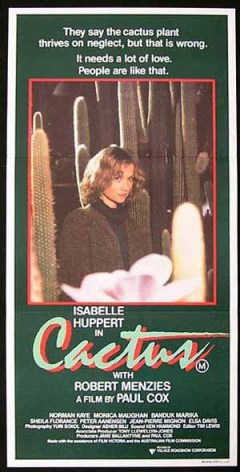 Of all the fine filmmakers who came out of the Australian film boom of the last decade, Paul Cox is perhaps the slowest starter. To prove it, he’s still making films Down Under while his fellow directors have long since found lucrative work in Hollywood.

Slow starters have a way of overtaking their competitors, of course, and Cox may yet be remembered as the prickliest and most striking of all Australian filmmakers. His previous films have included a harrowing divorce story, My First Wife, as well as the perversely touching Man of Flowers. His latest, Cactus, is another intriguing drama, full of dreamlike images and dark glimpses of human nature.

Isabelle Huppert plays a woman vacationing in Australia who has a bad car accident. A sliver of glass penetrates her left eye, which is rendered sightless, and the body’s sympathetic defense systems start destroying her unhurt right eye, too. She must have the left eye removed, or she will go completely blind.

She stalls her decision. During this time, she meets a blind man (Robert Menzies) and falls in love with him, although she has a husband in France.

The film’s conventional plausibility is taxed by Huppert’s decision. It’s hard to imagine anyone toying with the idea of losing her sight rather than having an eye removed. But if you buy the premise, the film yields rewards.

Cox and Huppert make the sweltering atmosphere of this Eden fairly mesmerizing. Huppert is staying with friends who live in a house just on the edge of civilization, with tangled jungle all around; the conversations are punctuated with exotic bird cries.

There are many haunting moments, such as Menzies’ single memory of vision: Blind from birth, he struck his head in a fall when he was a child, and swears he was able to see for a few seconds after. (Cox illustrates the moment with a montage of grainy 8 mm. film.) The idea of different kinds of sight is played with throughout the film; Huppert, her vision failing, says, “The accident has helped me see.”

Cactus is more difficult and obscure than Cox’s other films so far, but it’s much more interesting than most other movies around. When it comes right down to it, this fellow doesn’t make movies quite like anyone else, and that’s an increasingly rare kind of praise.

First published in the Herald, April 1987

Cox has kept busy, but it’s been hard to see his films. I can still hear the bird sounds in this movie, amplified (as Roger Ebert pointed out) as though to emphasize the keen hearing of the sightless.