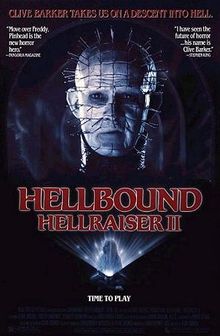 Hellbound: Hellraiser II was originally scheduled for Halloween release, which would seem to be a sensible course for a horror movie. But the film kept getting postponed, and now 1988 has run out of weekends. So here it is, just in time for Christmas.

Actually, the timing of the release provides an interesting experiment. There have often been action films that did well during the Christmas season (Sudden Impact and 48 HRS., for instance), but horror movies have not turned up much during the holidays. Will Hellbound tap the roving, restless out-of-high-school crowd, or will it be lost among the joyful tidings?

Whatever happens, the movie itself is a provocative entry in the horror genre. The first Hellraiser was written and directed by Clive Barker, the talented author of a number of volumes of horror (or Books of Blood, as some of his collections are known). Barker is credited only as executive producer on Hellbound, though it is taken from a story of his. The director here is Tony Randel.

Hellbound gets off to a cloggy start, as it’s necessary to catch us up on what happened in the first movie; we see a few clips of the more revolting sequences (hey, if you’ve paid for the special effects, why not use ’em again?). We find the teenage heroine (Ashley Laurence) from the first film in a mental hospital. Then we are introduced to an exceptionally perverse doctor (Kenneth Cranham) who enjoys drilling into peoples’ brains, apparently for the sheer fun of it.

This guy chants an incantation, and summons up one of the characters from the first movie, played by the spooky English actress Clare Higgins, who was last seen on her way to hell. She returns, but unfortunately without any skin. Yeccch. She looks like that model kit, The Visible Woman.

She pads around the doctor’s antiseptic home for a while, then covers herself in bandages like Claude Rains in The Invisible Man. Then she kisses the doctor—double yeccch—and calmly announces, “Now all we need is skin.”

This film manages to recapture the devilish humor of Hellraiser, but also veers off into some pretty startling territory; the last half-hour ventures into a hell full of Escher-like labyrinths, weird multi-limbed creatures, and big orchestral music. Like Hellraiser, the film is admittedly something of a mess, but students of horror will want to see it. Bring a strong stomach.

And they’re still churning these out! Some of which haven’t been bad, although I haven’t kept my Pinhead-watching up to date. Among other things, Clare Higgins, a mighty actress of British stage and screen, seems to be a very good sport.