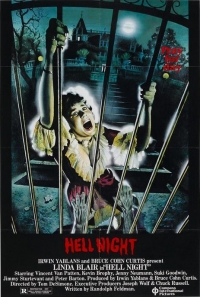 Horror-film fans, weary of the numbing dreck that quick-buck artists have cranked out in recent years, may be in for a modest surprise when they see Road Games. This intelligent thriller, shot in Australia, relies almost entirely on suggested rather than explicit violence.

A lonely truck driver (Stacy Keach) is carting a load of slaughtered pork across the Australian desert. He recites poetry, plays the mandolin, and shares bad puns with his pet dingo, Boswell. Gradually he begins to suspect that a fellow highway traveler is the perpetrator of a series of brutal hitchhiker murders.

Keach picks up a hitchhiker (Jamie Lee Curtis) out of protectiveness and personal curiosity, and they proceed to carry on a duel of wits and wheels with the presumptive killer.

An intriguing element in these road games is that we’re clued in early that Keach is exhausted, and as the suspect becomes increasingly devious, we begin to wonder (along with Keach) whether Keach is losing his sanity. Director Richard Franklin (of the award-winning Australian horror film Patrick) underscores this by having Keach’s usually cheery soliloquies answered in voice-over by his own fevered words.

The movie takes on the quality of a dream, with peripheral characters reappearing in the unlikeliest circumstances. There’s one scene that is like a classic frustration dream: The killer abducts a victim and drives off while Keach watches helplessly a few hundred feet away, where he’s been forced to stop his truck. Another good suspense scene involves—no kidding—a walk down rows of hanging pork in the back of a refrigerated truck.

Dead and Buried is pretty much today’s average horror fare, but it benefits from a wild central plot that sets it apart from a basic adolescent-slasher flick: Horrible murders are performed (and recorded on film) so that a madman may artfully reconstruct the disfigured dead and build his own army of zombies. All this fun takes plays in a sleepy resort town, Potter’s Bluff, where the town motto is “A New Way of Life.”

It’s become obvious that a subgenre of horror films mainly exists as an excuse to invent spectacularly grotesque makeup effects, like those in Maniac and Friday the 13th. Dead and Buried is explicitly about the process of makeup—making the dead look alive—so it’s very frank about lingering over some of the more grisly moments. The quality of the makeup ranges from gross-but-pretty-good to plain lousy.

The film also gives clench-jawed James Farentino the chance to let loose a couple of healthy screams, and the presence of the late Jack Albertson lends an eerie tone to speeches about the living dead.

The title Hell Night unwittingly, but conveniently, describes sitting through this grade-Z shocker. It’s the tale of an initiation ceremony that requires four fraternity/sorority pledges to spend the night in an abandoned spooky mansion. Seems that some years before, the family crazies that lived in the house had been massacred by one of their own, and legend has it the surviving lunatic may still be lurking around the place.

Of course he’s still lurking around the place, and soon the kids are dropping like flies, which corresponds to the level of humanity they’re treated with by the filmmakers. One of the boys (whom we have been led to believe is smart) suddenly decides he should go after the hulking maniac in the dark cellar with a pitchfork. It’s the beginning of about five minutes of the dullest would-be suspense in cinema history.

Poor Linda Blair is still being preyed upon, though rather than being possessed, as she was in The Exorcist, she seems bored for the duration of Hell Night. There is no reason whatsoever to blame her for this.

This was my first review for the Seattle Times, which means I’ll never forget my excitement at buying some copies on the day it came out. Won’t forget the disappointment, either: an editor had done what some editors do, which is tinker just enough with word choice and rhythm to muck up my stuff. I recall only one specific change, which was my word “dreck” being replaced by “junk” in the first sentence. So I restore the original here: nyah-nyah. (You don’t forget these kinds of things, folks.) I did a few reviews when Times reviewer John Hartl would go on vacation, and then I started writing reviews at the Herald, a Washington Post-owned daily in Everett, Washington. I did a summer on the TV desk at the Times, too, after which they contracted amnesia about me. As for the movies, Road Games is the real deal, Dead and Buried seems to have an appreciative following today, and Hell Night is still to be avoided.