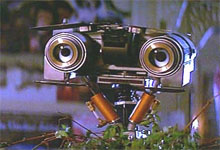 The main character of Short Circuit is a robot named Number Five. It’s intended as a military death machine, armed with a laser-zapper on its left shoulder. But one day Number Five is itself zapped, by an errant bolt of lightning, effectively cleaning its clocks and turning it into an $11 million steel-plated tabula rasa.

The robot escapes its Army camp and wanders into the streets of Astoria, Oregon, where it is given shelter by a sympathetic animal lover (Ally Sheedy). Number Five then absorbs the encyclopedia and 12 hours of television. Understandably, this drives the robot quite insane, and it starts believing—and the movie starts insisting—that the robot is now alive.

Of course, we’re not supposed to think it is now insane. Number Five means to be cuddly and humanoid, dishing out advice as well as breakfast and making with the jive slang. See, he’s picked up little bits of information from everywhere and incorporated them into his button-pushing biorhythms. He’s likely to segue from a stalwart John Wayne imitation to a TV anchorman’s pomposity to a re-creation of the physical profundities of the Three Stooges.

Ahem. What we have here is a movie engaging in a little unwitting self-description. Like its metallic hero, Short Circuit incorporates (read: steals) ideas from a gaggle of recent sources, most glaringly E.T., and regurgitates them with breathless hipness. So what you get is something fast and occasionally funny, but not remotely new.

Short Circuit is from director John Badham, who has made strikingly similar berserk-hardware movies before (WarGames, Blue Thunder). There was a time when Badham seemed like a promising director, with his lively version of Dracula and Saturday Night Fever (the latter is cannibalized by Badham for input fodder for Number Five, who apes a John Travolta dance routine on his able treads).

But Badham’s technique here, so clearly inspired by what has worked before, is pretty empty. The stranger-in-a-strange land routine is reliable, but it’s time to give it a rest. In fact, this movie might kill it: Not only does Number Five spout his cute newly learned American slang (to an opponent robot: “Hey, laser lips, yo’ momma was a snow-blower!”), so does a scientist (Fisher Stevens) from India (to his partner: “Let us go pick up some female chicks”).

Badham’s cast doesn’t help. The robot has more depth than Sheedy or Steve Guttenberg, who plays the robot’s inventor (yeeh, suuuure); he tries to find Number Rive before a gung-ho Army commander (G.W. Bailey) gets his hands on the thing.

They’re secondary to the technology. Number Five is constructed with great ingenuity—his wide-set eyes inevitably recall E.T.’s—but for all his savvy talk, he is a uniquely charmless being. This was a minority opinion at the laughing full-house preview where I saw the film, but even the laugh-getting seemed like a mechanical process, just a matter of pushing the right buttons.

Really bad movie, really a quintessential Eighties success story. I do recall being sort of fascinated by Fisher Stevens’ impeccably rendered Peter Sellers-like Indian character, because one had thought that such a stunt was long past doing. But there it is. (And he returned in the sequel, too.) This movie was a big hit.