The Year of Living Dangerously 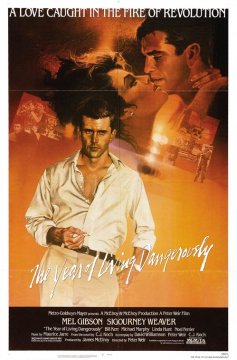 There’s this passage in the dialogue of The Year of Living Dangerously that can be turned back on the film itself so ironically that few reviewers—including this one—will be able to resist quoting it. Radio correspondent Guy Hamilton (Mel Gibson) is taken to task by his photographer/travel guide/guru, Billy Kwan (Linda Hunt), about an overly melodramatic news report the green journalist has made concerning the terrible conditions in current (1965) Jarkarta, Indonesia, a place that is sinking into poverty as it teeters on the edge of civil war. Guy’s piece was overblown, says Billy; Guy hammered points home and repeated himself, instead of letting the facts speak for themselves.

That happens to be an on-target assessment of the trouble with YOLD—things that would be better left for the viewer to discover on his own are carefully explained in the dialogue, and sometimes more than once. This practice is particularly discouraging with regard to the character of Billy, the mystically-inclined mulatto dwarf (and it’s especially frustrating because it mars a fascinating performance by Linda Hunt, a screen natural).

Billy’s observations—noted in a kind of diary, on which we eavesdrop—get flakier and more pretentious as the movie goes along, spelling out plot points as well as character motivations. Maybe director Peter Weir thinks this relieves him of some of his story-telling duties; and perhaps that explains why this narrative is so uncompelling. Weir goes for atmosphere instead, and the story starts going astray—at its own languid pace.

Even the love story, between Hamilton and gorgeous British Embassy attaché Jill Bryant (Sigourney Weaver) gets lost in the woozy ambience, although there’s a good sequence when Jill decides to give in to Guy’s suggestions of romance, and she walks down a street in the warm Jakarta rain; she’s soaked to the bone when she confronts Guy in the hallways outside his office, and it gives a special weirdness to the love scene that transpires. That kind of special weirdness has been a trademark of Peter Weir’s films in the past; The Year of Living Dangerously has a disappointing shortage of such strategies, which I guess has a lot to do with why it’s not my favorite Year.

First published in The Informer, February 1983

I did see this film again a few years ago, after reading the novel on which it’s based, and liked the movie very much. I think Weir’s ability to create his mysterious evocation of place and space was the deciding factor in my positive re-acquaintance with the film, although there’s a lot to be said for the human presence of Linda Hunt, and also Gibson-Weaver, a handsome duo. I still remember David Ansen writing in Newsweek (a writer I often felt in tune with back then) about the movie-movie gratification of the two stars finally getting into the clinches and laying some serious osculation on each other. He didn’t put it like that.