The James Bond movie series, which has been going strong since 1962, got an infusion of fresh blood last time around with the introduction of a new actor to play the famous member of Her Majesty’s Secret Service. Timothy Dalton, in The Living Daylights, brought a good mean edge to the role, thus wiping away marshmallow memories of lightweight Roger Moore.

Dalton is a welcome addition, but what the series needs now is some new talent behind the camera. Under the stewardship of producer Albert “Cubby” Broccoli, the same team has been churning out these things for years; writer Richard Maibaum and director John Glen have been associated with Bond, in one way or another, virtually since the beginning. Their age is showing. Bond may have been the epitome of turtlenecked, martini-sipping hip in the 1960s, but he’s beginning to look a bit square.

Licence to Kill is Bond’s summer workout, and there’s effort expended to give 007 some bite, by increasing the urgency of his mission and by splashing his female associates with a touch of women’s lib. The film opens in Key West, where Bond and longtime friend Felix Leiter (here played by David Hedison) are celebrating the latter’s wedding when a notorious Latin American drug lord (Robert Davi) escapes from custody, kills the bride, and dangles Leiter into the mouth of a great white shark.

Bond is peeved. When he meddles in the case, after being officially warned off, his license—er, licence—to kill is revoked. But then, our man Bond never really needed a permit, did he?

Then 007 goes to a fictional Latin American country to find and kill Davi. Bond gets the help of Davi’s sultry mistress (model Talisa Soto) and a mysterious but entirely capable American agent (Carey Lowell). Lowell is the most appealing “Bond girl” to come along in quite some time. She has a memorable introduction to the secret agent when the two have to battle their way out of a Bimini bar infested with bad guys.

Other scenes include Bond water-skiing behind a seaplane, throwing a villain into a tank with electric eels, and leading a merry chase down a mountainside in four tanker trucks full of gasoline and drugs. The stunts are up to the customary standard.

In fact, Licence to Kill is, at least on the surface, a solid enough outing. But there’s little life in the proceedings, and not nearly enough fun had with the usual gadgets and lavish locations (no globe-hopping this time, either). It’s time to open up a window on the series, lest Bond wither away.

And so that was it for Dalton, who gave way for Pierce Brosnan, who might have been Bond a few years earlier were it not for contractual issues. I think the lack of globe-trotting had to do with the attempt to carve a new “serious” Bond, which was going a bit far, but on the other hand this movie also had Wayne Newton and Don Stroud in it, so whatever. (A young Benicio Del Toro, too.) Nice that David Hedison got some work. 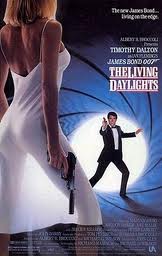 There hasn’t been such a major shake-up in the James Bond universe since 1969, when a new actor was introduced as the elegant spy. That time, it was the soon-to-be-forgotten George Lazenby who stepped into Sean Connery’s shoes. He only lasted the one outing; Connery came back for one more, then was replaced by the safe, sleepy Roger Moore, who dominated the lucrative series through 1985’s A View to a Kill.

Now, it’s time for another, lesser-known actor to assume the license to kill. Timothy Dalton, 40, is the new 007, a Welsh-born actor with considerable stage and some movie experience. Dalton’s introduction in The Living Daylights occurs in one of those all-out stunt sequences that begin every Bond movie—this time a romp across the Rock of Gibraltar.

Dalton’s got the physical requirements for the role—he can leap onto moving trucks, duke it out with bad guys, hang from the back of a plane at 10,000 feet. But can he order a vodka martini “shaken, not stirred,” and make it sound authentic?

Dalton does exactly that.

Although his leading nose and slitty eyes make him look a little like a duck at first glance, Dalton slips into the Bond persona with grace. And something more—this is a Bond with more gravity, more guts.

Dalton brings a renewed depth to the Bond character. This is not exactly difficult, since Moore’s main strength as the previous Bond was his facility in wearing a white tuxedo as though he’d been born in one. Moore’s superficiality cued the Bond movies into increased frivolousness. The Living Daylights restores some of the flesh of the original Ian Fleming novels.

And the film itself is closer to Fleming’s spirit than usual. The filmmakers—producer Albert “Cubby” Broccoli, director John Glen, writers Richard Maibuam and Michael G. Wilson—are all veterans of the series, and they seem to have deliberately sacrificed some of the jokiness in order to get Bond back on track.

For instance, the story here is a very traditional espionage tale about a Soviet defector (Jeroen Krabbe) who leads 007 into a tangled web of arms dealers, led by an American quasi-military man (Joe Don Baker) whose arms-selling adventures are reminiscent of some of Oliver North’s exploits. These are not bloated, cartoonish villains, although there is certainly some fun had at their expense.

The film even nods to the espionage-movie tradition by playing a scene in a Ferris wheel in Vienna, the same setting for a memorable scene in The Third Man.

More significantly, the usual bevy of Bond babes is banished. Excluding the bit of crumpet from the opening sequence, Bond sticks to one woman throughout, a cellist (Maryam D’Abo) who accompanies him on his adventures. The old formula had 007 bedding at least three women per movie. Some have suggested that this is the “post-AIDS Bond,” but perhaps it also signals more maturity for the character.

The filmmakers haven’t thrown away their entire bag of tricks. The gadgets are here, including a laser-equipped Aston Martin and a key ring that exudes a deadly gas when the opening bars of “Hail, Brittania” are whistled. The film does the standard globe-hopping, ranging from Czechoslovakia to Morocco to sunny Afghanistan. And what would a Bond movie be without one of Maurice Binder’s corny credits sequences?

Having lauded the film for moving Bond in more ambitious directions, I have to admit that The Living Daylights drags a bit. The stunt sequences are still good, but elsewhere things do get slow at times. Perhaps a new director could be brought in next go-round to pep things up. But keep the new Bond.

Yeah, Dalton had everything except movie-starness. This one was, as suggested, an invigorating change from the previous Bond phase, though not as galvanizing a transition as Casino Royalein 2006. And maturity in James Bond? That is not the goal, exactly, as seasoned as Dalton and Daniel Craig might be. Also, I forgot to mention the theme song, performed by A-ha. I wonder why.

A View to a Kill

With a Jones to a Kill

Every since 1980’s Moonraker—a vapid, terrible movie—the James Bond series has been undergoing an unexpected renaissance. The last few entries have been surprisingly enjoyable adventure movies.

Perhaps it’s because star Roger Moore doesn’t feel he has to prove himself in the role that really belongs to Sean Connery. Moore is all relaxation these days, and the Bond films—still guided by producer Albert (Cubby) Broccoli, who’s been on board since the first Bond picture, Dr. No, in 1962—whirl around him with solid special effects, some (but not too much) glitzy gadgetry, spectacular stunts, and gorgeous women.

A View to a Kill, the one for summer ’85, fulfills the Bond formula very well. Directed by John Glen, who also did a clean job directing For Your Eyes Only and Octopussy, this adventure takes Bond from the Siberian wasteland (in the pre-credits teaser, which is camped up by the use of “California Girls” on the soundtrack), to the high society of Paris, to a nifty high-wire act atop the Golden Gate Bridge in San Francisco.

Most important, this film boasts some fine villains for Bond to play against—and that’s always an important part of the 007 experience. Christopher Walken is the blond, psychotic madman who seeks to—dare we say it?—rule the world, through a devious plan to destroy Silicon Valley and control the world’s microchip sales through his own company. Walken injects lots of little bizarre nuances into his performance, and he seems to be enjoying himself immensely.

His chief henchman (henchperson?) is played by Grace Jones, the androgynous singer. A clever casting idea, and Jones, with her stunning looks, keeps the film from getting stodgy. German actor Patrick Bauchau (the husband in Choose Me) lends his powerful presence as another of Walken’s baddies.

The good girl is Tanya Roberts, who looks great but is pretty insipid. She is, unfortunately, much less interesting than the villains, so the audience’s subconscious sympathies may get confused.

Moore, collecting more wrinkles as the years go by, is bland but smooth, gliding through a party at a French chateau in trademark white dinner jacket, jumping around on the Eiffel Tower, hanging from a rope attached to a blimp, or scuttling around one of the Golden Gate’s towers. It’s business as usual for the man with the license to kill.

It’s business as usual all around. A View to a Kill—theme song by Duran Duran this time out, by the way—won’t knock anybody’s socks off, and it doesn’t’ resemble anything like great cinema. But then, it doesn’t attempt anything more than the playing out of its familiar formula. As such, it must be counted a success. Certainly in box-office terms it has a rosy future.

At the end of the Bond films, there’s always a tag line in the credits: “James Bond will return in…” fill in the title. This time, we just get the vague assurance that “James Bond will return.” Hmmm. Something’s up—Roger Moore may be getting a bit long in the tooth for all the action. I’m guessing this will be his last outing as Bond, but the character will probably go on forever. They’ve replaced him before, after all.

This is the best I could do right now for a John Barry tribute—where the hell’s my Out of Africa review? I’m not sure A View to a Kill has worn well for 007 fans, but apparently I liked it, and that zany cast of villains seemed fun at the time. I’m guessing Grace Jones hasn’t aged well in the role. (Richard Kiel must’ve been pissed.) In 1985, it was still possible to write “Walken injects lots of little bizarre nuances into his performance” without that seeming like an obvious point. John Barry has brought more to the Bond franchise than perhaps it deserved (his You Only Live Twice is the movie I remember, not the actual film), and although I guess I should be embarrassed to say this I think his Duran Duran collaboration suited the Bond world rather well.