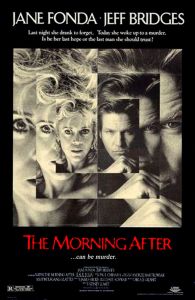 Americans are in the midst of a surging love affair with the mystery story; the hard-boiled novel is booming, and television sleuths proliferate. The movies, however, have not had much to be proud of in the genre lately, but audiences were so hungry for the form that they made Jagged Edge, a bad movie, one of the surprise hits of 1985.

The Morning After is much in the Jagged Edge vein. It even borrows the star of that film, Jeff Bridges, for another shifty role.

The set-up is good, and the stuff of classic mystery: A woman (Jane Fonda) wakes up one morning in a strange apartment, with no idea how she got there. That’s not unusual; she’s a boozy has-been actress who has seen one too many mornings like this. She looks over at the man next to her, who seems to be in a dead sleep. Except that, as it turns out, he’s not asleep, just dead. There’s a huge knife sticking out of his chest, and she doesn’t know how it got there.

She’s got to find out whodunit while avoiding the attention of the police. Her husband (Raul Julia), from whom she is separated, is some help. An unlikely ally is the redneck ex-cop (Bridges) she bumps into.

This is a perfectly adequate way to launch a thriller. But director Sidney Lumet does not know quite how to treat the tawdry story, and the film unravels early on.

Many such suspense films take place in a night world, full of shadows and darkness. Lumet places this story in the harsh Los Angeles sunlight, presumably in keeping with the title, and to remain thematically consistent with the heroine’s spiritual enlightenment. Unfortunately, this bleaches any atmosphere out of the film; the daylight has a dulling effect on the mystery.

There is one nice scene – at night – when the newly acquainted Fonda and Bridges share a Thanksgiving dinner of turkey cold cuts and Thunderbird wine. She talks of her starlet past, and tells him that “they were grooming me to be the next Vera Miles.” (“Who?” he says.)

But Lumet flubs the mystery. The movie cheats on its characters – one crucial person isn’t introduced until the film is almost over – and logical lapses abound.

Bridges is his professional self, though he doesn’t have very much to do. He seems to be single-handedly bringing back the suspenseful thriller tradition of film noir, with his roles in Cutter’s Way, Against All Odds, Jagged Edge, and 8 Million Ways to Die in the last few years. It’s a good cause, but the films need to get better.

Fonda, whose production company helped make the movie, all too obviously considers this role a stretch (no pun on her exercise regimen intended). She has a few good scenes, but most of her performance is laid on too thick.

Lumet is completing a family circle. His first feature film, Twelve Angry Men, starred and was produced by Fonda’s father. Henry insisted the young Lumet be given the directorial shot then, and the kid was off to a busy career. Not necessarily a progressive career, however. Twelve Angry Men will be remembered a lot longer than The Morning After.

First published in the Herald, December 1986

I wonder if this films looks better today; it certainly hasn’t been remembered much, as I suggested. Someone should really do a series devoted to 80s Bridges Noir, even if the results (save for Cutter’s Way, a masterpiece) were not individually satisfying. The hard-boiled revival I refer to must have included the re-discovery of writers such as Jim Thompson at this time, which was an exciting moment.

This entry was posted on Tuesday, December 3rd, 2019 at 7:38 am and is filed under 1986. You can follow any responses to this entry through the RSS 2.0 feed. You can leave a response, or trackback from your own site.